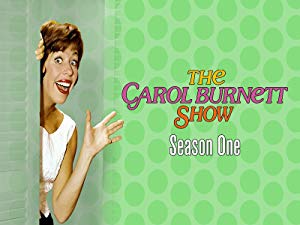 There are two fantastic developments in the eternal quest to reconstruct all of the missing Carol Burnett Shows: First, MeTV has finished with the previously syndicated Seasons 6-11 and began showing the heretofore unseen Seasons 1-5 in chopped-down, half-hour segments. Second, I happened to be on Amazon Prime and discovered they are now streaming all of the first six seasons, plus season eight. I was so excited. I thought, now I don't have to buy that expensive second DVD collection, the Best of the Carol Burnett Show which has episodes not in The Lost Episodes DVD set I got for Christmas. So I eagerly clicked on the first episode expecting the entire hour, but all they have is the 22-minute edited version MeTV is running. If I want to see complete episodes, I will have to buy the DVD and even then, a lot of material will be missing from the MeTV/Amazon segments. Based on the complete list of episodes in Carol's book, In Such Good Company, there also seems to be a few episodes not included in either MeTV or Amazon.

Anyway, here is a rundown of the edited segments running on both platforms. Episodes already reviewed in the previous seven Carol Burnett blogs are not included, nor are those which can be found on the large DVD collections which will be reviewed later since there is access to the complete show on the DVD.

Season One:
Oct. 23, 1967: The Smothers Brothers, Diahann Carroll, Richard Kiley
Not much going on in this one. Carol introduces the Smothers Brothers as her neighbors from across the hall since they were filming their relatively short-lived variety series at CBS then. Tommy Smothers is a blissed-out yogi and Carol is buxom Hollywood starlet in a sketch satirizing the 1960s trend of celebrities seeking enlightenment. Then Carol, Diahann, and the chorus dancers are kids braving a haunted house in the musical finale. Richard Kiley has been cut out entirely. He probably sang "The Impossible Dream" from Man of La Mancha. Diahann and he co-starred in No Strings on Broadway. I wonder if they did a number together.


Nov. 13, 1967: Richard Chamberlain, Gloria Loring, Kay Medford
Perhaps Carol's most famous sketch was Went with the Wind, the spoof of Gone with the Wind, coinciding with the TV network premiere of the MGM classic. Who could forget Carol entering at the top of the stairs in a dress made from curtains, with the rod still in it? But this was not the first time the show spoofed David O. Selznick's massive Civil War spectacle. In this early episode, we are treated to Gone with the Breeze which does not follow the plot of the film as closely as Went with the Wind. In this version, the Clark Gable figure (played by guest star Richard Chamberlain) returns to a devastated TaRaRaRa plantation, to find an insane Scarlett O'Fever (Carol). The only other character is Harvey as Uncle Ben, a white old servant who thinks he's a slave. The name allows Carol to make a joke about him cooking some rice. The sketch is not very funny with gags on that Uncle Ben level. The main humor derives from crazy Carol letting out a Woody Woodpecker laugh and acting like a loonier take-off on Bette Davis in Hush, Hush, Sweet Charlotte. Note: They used the same spoof name Rat (instead of Rhett) Butler when Harvey played it in Went with the Wind.

The only other sketch in this shortened edition is a Carol and Sis scene with Kay Medford as Roger's nasty sister visiting to care for her injured brother and insulting Carol. The exact same sketch was performed a few seasons later with Pat Carroll as the sister. Medford was best known for playing Barbra Streisand's mother in the film Funny Girl and embodying meddling Jewish mamas on numerous TV series such as The Dean Martin Show and Barney Miller.

Nov. 20, 1967: Martha Raye, Juliet Prowse
A rather routine show with boisterous, overboard Martha Raye in a colorful mod outfit as an obnoxious swinger sharing a cruise cabin with repressed hypochondriac Carol. Then Carol is a clairvoyant patient of two psychiatrists, played by Harvey and Dick Wilson, best remembered as Mr. Whipple on the Charmin commercials and as a recurring drunk on Bewitched. The butchered show ends with a VIP segment featuring Carol as LBJ's daughter getting ready for her wedding. You'd have to know that the Presidential daughter had dated then-hot film star George Hamilton to get a lot of the jokes. Juliet Prowse only appeared in the goodbyes.

Dec. 25, 1967: Sid Caesar, Ella Fitzgerald, Jonathan Winters
Jonathan Winters appears briefly at the top of this segment, pretending to stand in for Carol during the Q&A. Actually, it's a plug for his own CBS variety series. The actual guests were the legendary Sid Caesar and Ella Fitzgerald, the greatest singer of the 20th century, who is only seen at the end.
Caesar does a bit with Carol as his professor character and then there is an outstanding parody of ancient Roman spectacles called Fiddler on the Forum with Harvey as Emperor Lascivious, Carol as Empress Passionata, and Sid as Syndey, a rebellious slave. Future Tony nominee Lee Roy Reams can be seen as a shirtless slave boy. The segment ends with Carol as the charwoman singing "Have Yourself a Merry Little Christmas," and then getting her guests to sign her autograph book. This may be the only time she did not end the show with her theme song.

Caesar and Fitzgerald would be the guests again on a show in 1968. This segment is available in its entirety on The Best of the Carol Burnett Show DVD collection, another reason to get it.

April 29, 1968: Sid Caesar, Barbara McNair
Musical guest Barbara McNair at least gets to be seen in a brief sketch in this chopped-up episode. (I still don't understand why some shows have been split into two parts and we get most of the original, while others only preserve 22 minutes. Wouldn't they be getting more half-hours that way?) Anyway, McNair, an African-American songstress who replaced Diahann Carroll in No Strings and starred opposite Hal Linden in a revival of The Pajama Game, is featured in a spoof of I Spy called I Try. McNair and Burnett play female versions of Bill Cosby and Robert Culp, TV's first racially integrated espionage agent team. This short sketch was actually pretty daring for its time. The gag is this mixed duo is in more trouble in the segregated deep South than in the Middle East or Communist Russia. Lyle as a thug attempts to shoot McNair. After she has subdued him with karate, she asks, "All right, how did you know I was a spy?" He replies with a Southern accent, "A spy? I thought you was here to vote."

Caesar and Carol play broken-down silent-film stars with Caesar reprising the joke of having a high-pitched, unsexy voice and failing to understand why he didn't make it in talkies. The 22-min. segment is rounded out with Carol and Harvey as actors on a live TV melodrama tormented by drunken sound-effects man Lyle. This is another instance of a sketch being recycled. The same one shows up in a later season. Before endless reruns and streaming, I suppose the writers thought no one would remember a bit from a few years ago. The goodbyes feature Carol as the charwoman on a United Nations set which piques my curiosity.

Posted by david.sheward at 9:40 PM