A Scene from Trump's America 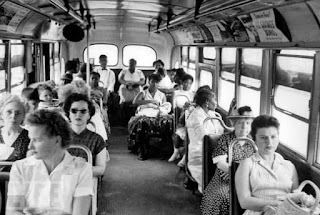 While riding the bus home from work yesterday, I encountered an ugly interaction. I was seated at the back. The bus was remaining at a stop for a long time. Then I saw that the driver had lowered the ramp and an elderly black woman with one of those walkers with wheels was getting on. All of the seats in the handicapped section were filled and she upbraided the ungentlemanly occupants in a distinct Jamaican accent. "This is for the handicapped," she shouted. "Please one of you get up and let a poor, helpless old lady sit down." She sounded far from helpless. I had stopped paying attention and went back to my book (The Swans of Fifth Avenue on my Kindle app on my I-phone). But then another voice began shouting as loudly as the black woman's, hurling racist invective. "Who do you think you are, you old hag?" was coming from a tall white guy in his late 30s or early 40s. Evidently, the black woman had shamed him into getting up because he standing across from her. The woman called him an idiot. He answered with slurs on her race and accent, "Look in the mirror. You notice there are no people like you in this neighborhood. You're not wanted here. Go back to your shithole country where you came from. Trump was right about Haiti and those other shitholes."

Read more »
Posted by david.sheward at 9:42 AM No comments:

My First Show in Every Broadway Theater

A recent trend on Facebook is to list the first show you saw in every Broadway theater. I thought it would be easy for me, but my memory is not as razor sharp as it used to be. Plus I no longer keep all my Playbills in either chronological or alphabetical order. So I had to go online and actually do research. Internet Broadway Data Base (ibdb) which lists every show ever played in every theater, was most useful. Other sites only listed major long-running hits. It was fun and raised a lot of memories. Here's my list along with anecdotes and thoughts.
Ambassador: DREAMGIRLS--a revival
American Airlines: THE MAN WHO CAME TO DINNER--This was the first production in the new AA Theater
Atkinson: THE DRESSER--on a trip to NYC while I was in college in Philly.
Barrymore: LILLIAN--Zoe Caldwell in a one-woman show as the playwright Lillian Hellman.
Beaumont: THE FRONT PAGE (John Lithgow, Richard Thomas)
Belasco: AMERICAN BUFFALO (w/Robert Duvall)--I was in high school and my family took a trip to NYC for a weekend and I crammed in as many shows as possible. Duvall was brilliantly scary.
Bernard B. Jacobs (Royale): YOU CAN’T TAKE IT WITH YOU (Eddie Albert, Frances Sternhagen, Colleen Dewhurst, George Rose)--I got cheap seats from Audience Extras when I first moved to Gotham. This revival had been running a while. Eddie Albert had replaced Jason Robards as Grandpa.
Booth: GOOD--a British play about a well-meaning German who gradually becomes a high-ranking Nazi.
Broadhurst: LONG DAY’S JOURNEY INTO NIGHT (Jack Lemmon, Kevin Spacey)

Read more »
Posted by david.sheward at 11:36 AM No comments:

Let's play three degrees of separation among this year's front-runners for the Oscars. Michael Stuhlbarg is in three of this year's possible Best Picture Oscar nominees--Call Me By Your Name, The Shape of Water, and The Post. Timothee Chalamant is touted as Best Actor for Call Me By Your Name and has a small role in Ladybird. Pulitzer Prize winning playwright and Tony winning actor Tracey Letts is in The Post and Ladybird (Letts also starred in The Lovers, a small independent film). Laurie Metcalf is a favorite for Best Supporting Actress for Ladybird as Letts' wife and Saoirse Ronan's mother. She won a Tony last year for A Doll's House Part 2. Stephen McKinley Henderson was in the replacement company of Doll's House and has a supporting role in Ladybird. Lucas Hedges is in both Ladybird and Three Billboards Outside Ebbing, Missouri. Lois Smith is also in Ladybird and Marjorie Prime--she also did the play version and she is nominated for an Independent Spirit Award for the movie.
Posted by david.sheward at 7:50 PM No comments:

Oprah Emerges as Possible Prez and Trump Reveals His Racism

In 2004, CBS ran a short-lived drama series called Century City. It starred Viola Davis and Hector Elizondo, was set in the year 2030 and combined elements of science fiction and legal procedural. In one episode, it is revealed that Oprah Winfrey is president and her VP is an openly gay, one-armed, retired general. The show only ran four episodes before it was cancelled and has been forgotten. But it may be remembered for predicting our next president, ten years early. Winfrey gave such a stirring speech at last Sunday night's Golden Globes Awards upon receiving the Cecil B. De Mille Lifetime Achievement Award that it sparked calls for her to ran for Chief Executive in 2020.

Read more »
Posted by david.sheward at 8:38 AM No comments:

Our idiot president's declaration that he is a "very stable genius" on Twitter in response to Michael Wolff's book "Fire and Fury," caused innumerable social media wits to compare him to the immortal Warner Brothers character Wile E. Coyote who was constantly bragging about his intellect when pursuing Bugs Bunny. Wile E. is more famous for the series of cartoons he starred in with the Road Runner, which later served as the basis for a Saturday morning series on ABC. (It later expanded to the Bugs Bunny-Road Runner Hour.) The difference between the two series is Wile E. remains mute in his encounters with the RR while he builds more and more elaborate contraptions--usually employing supplies from the Acme Company--to ensnare his feathered prey. In his jousts with Bugs, Wile E. is extremely verbal, bragging about his colossal intellect and that Bugs should give up since he can never win in their battle of wills.