Here we are in the fifth month of a pandemic and no end in sight. There have been occasional forays 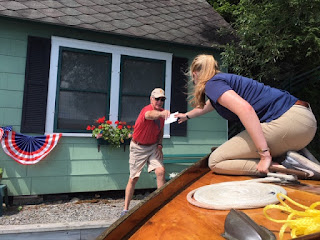 out of our Queens apartment, but largely it's been confinement city. Normally during the summer, we try to take a trip or two. Months ago, my husband and I had talked about a trip to France and I was planning to drive to Canada and take in the Stratford and Shaw festivals, but that's clearly out now. But we did have a welcome respite with a week-long trip to the Finger Lakes region. Since we were staying within New York State and infection rates are way down here, we figured it would be okay as long as we were careful and followed safety rules. We've been there many times before, but this time, we really explored and found many interesting distractions.

We stayed at a lovely Air BnB run by friends just outside of a lakeside town called Skaneateles, a funny name used as a joke on Rocky and Bullwinkle decades ago. There were cruises around the lake on a modified schedule and with reduced capacity. In all the previous visits, we had never taken a boat trip before, so we opted for the mail boat, a three-hour cruise around the lake (the captain made the obligatory Gilligan's Island joke). Not all the lake houses are accessible by roads, so some have to have their mail delivered by boat. A crew member crawls out on the prow and leaning out hands to the letters to the homeowner or places them in a mailbox on the dock. There were only about 25 passengers and we were required to be keep our masks on if we stood up and moved about. Being on the water was so refreshing and relaxing.

Read more »
Posted by david.sheward at 9:23 AM No comments:

The future of Broadway is still in doubt. In an interview with Billboard, a respected music producer whose credits include shows for Lady Gaga and Nine Inch Nails, predicted live concerts would not return until 2022 (so live theater would also be included in that forecast.) Broadway League president Charlotte St. Martin has been more optimistic, but she has said that while theaters may open next year, tourism might not come back in full force until 2024.

Nevertheless, more announcements of Broadway productions for spring and fall 2021 are being made. Second Stage has set next autumn for the vague opening of a new, unnamed play by two-time Pulitzer Prize winner Lynn Nottage to start performances at the Helen Hayes Theater. The press release described the work as "a stirring new play" in which "a truck stop sandwich shop offers its formerly incarcerated kitchen staff a shot at reclaiming their lives. Even as the shop's callous owner tries to keep them under her thumb, the staff members are given purpose and permission to dream by the enigmatic, zen-like chef and his belief in the possibility of the perfect sandwich." This sounds exactly like Nottage's play FLOYD'S (the name of the female owner of the shop) which premiered at Minneapolis' Guthrie Theater in August 2019. Why the name change and what will the new name be? Perhaps the switch is because the producers want to avoid confusion with George Floyd, the African-American man who was killed by a white Minneapolis police officer kneeling on his neck. Floyd's death sparked nationwide protests against police brutality and systemic racism.

Read more »
Posted by david.sheward at 9:32 AM No comments:

With the recent passing of Carl Reiner at the age of 98, I began thinking of my favorite moments of TV comedy and he was responsible for many of them. As the creator and main writer for the classic Dick 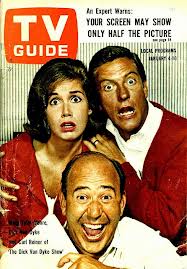 Van Dyke Show, Reiner delivered many of the biggest laughs of my childhood. As Alan Brady, the tyrannical top banana Van Dyke's character wrote for, he had several of the show's funniest bits. The first season you could only see the back of Alan's head, but in later seasons, you saw all of Reiner. He would often mock his own baldness. One of the most hilarious moments of the show was when Alan was holding up an empty glass for his boot-licking brother-in-law Mel Cooley (Richard Deacon). "What's the matter, Alan? Are you thirsty?," Mel asked.

"No, Mel, I want a glass of dust," Brady angrily shot back.

The delivery and the sarcasm made another otherwise so-so gag into a merciless putdown.

Reiner was also a versatile sketch comedian, appearing on such shows as The Carol Burnett Show and Rowan and Martin's Laugh-In. He did voice-overs for the Linus the Lion-Hearted cartoon series in the 1960s, as did Jonathan Winters and Sheldon Leonard.

Read more »
Posted by david.sheward at 9:45 AM No comments:

Announcements continue for the (projected) Broadway reopening in 2021. The Broadway League announced on Monday, refunds and exchanges will be granted up until Jan. 3 of next year. Broadway and Off-Broadway theaters have been closed since March 12 due to the corona virus pandemic. Several productions announced previews and openings beginning in March. The League also said there would be "rolling" openings in early 2021 but so far, the earliest show with a specific date is Tracey Letts' The Minutes which begins previews at the Cort Theater on March 1.

Second Stage's revival of Take Me Out, Richard Greenberg's 2002 play imagining an openly gay major league baseball player who comes out during a championship season, will begin previews at the Helen Hayes Theater on March 22 with an opening set for April 22. The production was originally set to throw out its first pitch on April 21 of this year. The cast is headed by Jesse Williams (Grey's Anatomy), Patrick J. Adams (Suits), and Drama Desk winner Jesse Tyler Ferguson (Modern Family). Scott Ellis (Tootsie, She Loves Me) directs. The original production opened at London's Donmar Warehouse in 2002 and then transferred to Public Theater Off-Broadway. The subsequent Broadway transfer won the 2003 Tony Award for Best Play and Best Featured Actor for Denis O'Hare.

Read more »
Posted by david.sheward at 2:48 PM No comments: