The 2021-22 Broadway season is far from over, yet already we are getting announcements of the very busy fall portion of 2022-23. Three productions--K-POP, The Piano Lesson, and Camelot--have definite dates and/or theaters, joining the Broadway transfer of Kimberly Akimbo. K-POP, a musical centering on the titular Korean music genre, will begin previews at the Circle in the Square on Oct. 13 in advance of a Nov. 20 opening. Korean pop star Luna will headline the show which had an award-winning Off-Broadway run at Ars Nova in 2017. In addition to being a music superstar, Luna has appeared in South Korean editions of such musicals as Legally Blonde, Coyote Ugly, High School Musical, In the Heights, and Mamma Mia! The 2017 run of K-Pop won three Lortel Awards including Outstanding Musical and was nominated for seven Drama Desk Awards. The original director Teddy Bergman and choreographer Jennifer Weber will return to create an immersive experience, much like their Off-Broadway production, which was conceived by Woodside Collective and Jason Kim who also wrote the book. The lyrics are by Helen Park and Max Vernon. Ma-Yi Theater Company and Woodside Collective also helped produce the original show.A revival of August Wilson's The Piano Lesson starring Samuel L. Jackson, who just won an Honorary Oscar, and directed by his wife Tony nominee LaTanya Richardson Jackson (A Raisin in the Sun), will begin preview performances at the St. James on Sept. 19 for 16-week limited run. John David Washington (Black Klansman) and Danielle Brooks (The Color Purple) will also star. This will be the first Broadway revival of the play which won the 1990 Pulitzer Prize. Samuel L. Jackson originated the role of Boy Willie in the play's 1987 world premiere at Yale Repertory Theater. He will now play Doaker, Boy Willie's uncle. The opening date and further casting are still to be announced. Set in the 1930s, The Piano Lesson is Wilson's fourth play chronologically in his decade-by-decade series of works on the African-American experience in the 20th century. The original Broadway production starred Charles S. Dutton, S. Epatha Merkerson, Carl Gordon, and Rocky Carroll and ran for 328 performances.
Read more »
Posted by david.sheward at 3:35 PM No comments:

April is almost upon us. That's the month when critics' datebooks are choked with openings in order to beat the deadline for the Tony Awards which has recently been announced as April 27. After two years of COVID, the awards will return to their traditional date of early June (June 12 to be precise). To complicate matters, the Bob Dylan musical Girl from the North Country is re-opening at the Belasco for 50 performances only. Performances will begin on Friday, April 29th and will run through Saturday, June 11th. Girl closed at the Belasco on Jan. 23 due to dropping sales during the omicron COVID surge. It's probably re-opening for such a short time in order to increase its Tony chances and jog voters' memories. The cast will return except for Marc Kudish who is committed to the new musical version of Trading Places at the Alliance Theater in Atlanta. His role of the broken-down businessman with a mentally-challenged son will be taken over by Craig Bierko (Tony nominee for the last Broadway revival of The Music Man).
Read more »
Posted by david.sheward at 3:06 PM No comments:

Email ThisBlogThis!Share to TwitterShare to FacebookShare to Pinterest
Labels: Broadway, Girl from the North Country, Lortel Awards, To Kill a Mockingbird, Tony Awards

This year's Oscar race has been a fun one for me. Thanks to streaming services, I have been able to see most of the nominees in the major categories. The field is a broad and fascinating one, ranging from the satire of Don't Look Up to science-fiction outer worldliness of Dune. In previous blogs, I noted my journey of viewing as many nominated films as possible. Here are my predictions for the big night. The big battle for the top prize is between CODA and Power of the Dog while Dune will dominate the technical and design categories.

Best Picture
Prediction: CODA
Preference: The Power of the Dog or West Side Story 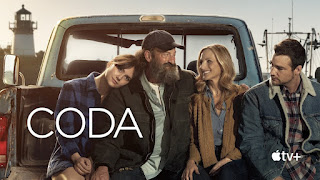 Jane Campion's psychological Western The Power of the Dog was the front-runner for the top Oscar for much of the pre-awards season, but with wins at the SAGs and PGAs (Producers Guild), CODA, a feel-good weepy about the hearing daughter of deaf parents and her triumph over adversity and unfair fishing laws, looks to be the likely winner. Dog is a much more challenging, disturbing film with its subtle exposure of toxic masculinity and repressed gayness. If the cozy CODA triumphs, it will follow an Oscar pattern of choosing the easy, conventional film over more challenging work without happy endings. Previous examples include Green Book over Black Klansman, Crash over Brokeback Mountain, Ordinary People over Raging Bull, Rocky over All the President's Men and, of course, How Green Was My Valley over Citizen Kane. However, in recent years, Oscar has occasionally chosen the more unique candidate such as Nomadland, Parasite and 12 Years a Slave. I am also rooting for West Side Story, Steven Spielberg's brilliant remake of the 1961 Oscar winner which was dealt a deadly blow at the box office because people under 50 don't seem to care about movie musicals.
Read more »
Posted by david.sheward at 7:42 PM No comments:

Email ThisBlogThis!Share to TwitterShare to FacebookShare to Pinterest
Labels: CODA, Jessica Chastain, Oscars, Power of the Dog, West Side Story, Will Smith

With last Friday night's viewing of Paul Thomas Anderson's Licorice Pizza on iTunes, I completed my quest to see all of Oscar-nominated Best Pictures. Incidentally, I've also viewed all of the acting nominees, all the directors and all but one of the Best Original and Adapted Screenplays (The Worst Person in the World is the only one missing). Alana Haim of Pizza should have been nominated for Best Actress. She plays Alana, the 25-year-old young woman in a push-pull romance with Gary, the teenaged former child actor hustling water beds and pinball machines in 1973 LA. Haim beautifully conveys Alana's conflicting desires to find a grown-up life and to cavort with Gary. There were also memorable cameos by Christine Ebersole as a star not unlike Lucille Ball, Harriet Harris as a bizarre talent agent, and Bradley Cooper as a wigged-out Jon Peters, boiling with rage because he's late for his date with Barbra Streisand.
Read more »
Posted by david.sheward at 7:12 AM No comments:

Public television stations have been playing full-hour episodes of Carol's show under the umbrella title Carol's Favorites. I first caught this while visiting my mother in Pennsylvania. Channel 12, the Philadelphia PBS station, was showing the one with Pearl Bailey and Tim Conway. These reruns have been shown in the NYC area on WLIW, Channel 21, the Long Island-based PBS station. I have seen most of these hours on DVD or I remember them vividly. They are mostly from seasons six through eleven which have been accessible in one form or another. But occasionally a stray episode or two has popped up with material I've never seen, usually from seasons 1-5 which only recently became available. Here is one I just saw:

Season Five
Dec. 29, 1971: Steve Lawrence, Dick Martin, Vivian Bonnell
This almost New Year's Eve segment is probably best-known for containing the first of the spin-offs of Billy Wilder's classic Sunset Boulevard with Carol as decrepit, damaged version of Gloria Swanson's Norma Desmond (here called Nora Desmond) and Harvey as her Teutonic, fanatic butler Max.
This episode had been chopped up and seen on the Carol Burnett and Friends, 22-minute syndicated series, but has been missing even from that venue. I notice that a lot of episodes on Amazon have become unavailable, including this one. I had only seen the shorter version which had the Sunset Boulevard sketch and an edition of As the Stomach Turns and never viewed the missing material.
Read more »
Posted by david.sheward at 6:40 PM No comments:

The quest to view as many Oscar-nominated films as possible before the ceremony on March 27 continues. Friday night March 4, I watched Spencer on Hulu with Kristin Stewart nominated for her bizarre performance as Diana, Princess of Wales. She was the last Best Actress nominee on my list and it was weird. The screenplay is set during a tense Christmas weekend at Sandinghurst Castle, right next to the now-abandoned estate where Diana grew up. Diana is practically off her chump at this point as her marriage with Charles has deteriorated. She suffers from bulimia as visions of Anne Boelyn dance in her head. The director and cinematographer cast everything in nightmare hues. Stewart's performance cries out "I'm having a nervous breakdown, see!" The Crown made more sense. This was like a bad psychological dream. So I don't think she stands a chance of winning and probably stole Lady Gaga's spot for House of Gucci. (If I can squeeze in the Gucci pic which is nominated for Hair and Makeup, I'll try. I want to see if was worthy or if the Academy just had it in for Gaga and Jared Leto. But I want to get in all the candidates for Best International Film, Animated Film, Documentary Feature, etc. first).
Read more »
Posted by david.sheward at 3:54 PM No comments: 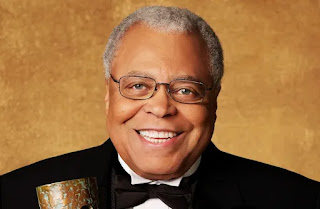 James Earl Jones, whose theatrical career spans six decades, will become the second African-American theatre artist and the only living person to have a Broadway theater named after them when the Cort Theater is renamed the James Earl Jones Theater. (Playwright August Wilson was the first African-American to be so honored.) The Cort Theater, built in 1912, has had extensive renovations done during the COVID pandemic shutdown and will be formally reopening with a dedication ceremony this coming summer.

Jones made his full Broadway debut in 1958 at the Cort in Sunrise at Campobello. (He was an understudy for a flop called The Egghead in 1957.) He has since won two Tony Awards for The Great White Hope (1968) and Fences (1987); seven Drama Desk Awards; the Kennedy Center Honor; a National Arts Medal; and two Emmy Awards in the same year (1990) for Gabriel's Fire and Heat Wave. His numerous additional Broadway credits include Les Blancs, The Iceman Cometh, Of Mice and Men, Paul Robeson, Othello (opposite Christopher Plummer), On Golden Pond, Cat on a Hot Tin Roof, Gore Vidal's The Best Man, Driving Miss Daisy, You Can't Take It With You, and The Gin Game. At the Central Park's Delacorte Theater, he has played the Prince of Morocco in The Merchant of Venice, Claudius in Hamlet, and the title role in King Lear (captured on video for PBS' Theater in America series). Also Off-Broadway he appeared in The Blacks, Boesman and Lena, and The Cherry Orchard. Probably best known as the voice of Darth Vader in the Star Wars films, Jones's movie roles range from Dr. Strangelove and The Comedians opposite Richard Burton and Elizabeth Taylor to Coming to America with Eddie Murphy to Field of Dreams.

Read more »
Posted by david.sheward at 8:16 PM No comments: