Broadway is definitely back with Sunday night's  long-delayed Tonys followed by announcements of new productions. On Monday, Slave Play and Skin of Our Teeth released dates for openings. Today, we heard Daniel Craig will bounce back on stage after his fifth and final performance as James Bond in No Time to Die. The action and dramatic star will headline a revival of Macbeth opposite Ruth Negga, who played Hamlet at St. Ann's Warehouse. This new production of the Scottish Play will begin previews at the Lyceum Theater on March 29, 2022 in advance of an April 28 opening. Tony winner Sam Gold (A Doll's House, Part 2, Fun Home) directs. Craig has previously appeared on Broadway in A Steady Rain and Mike Nichols' production of Betrayal. Off-Broadway, he played Iago to David Oyelowo's Othello.
Read more »
Posted by david.sheward at 3:42 PM No comments:

Last night's long-delayed Tony Awards were full of surprises from the Paramount Plus portion of the ceremony ending ten minutes early to an extra four minutes of Big Brother cutting into the opening of the CBS portion of the show to the unexpected shut-out of Jeremy O. Harris' Slave Play. Harris' controversial play about sex, race, and oppression received the most Tony nominations ever for a straight play with 12 and was thought to be a shoe-in to sweep the dramatic categories. But, Slave lost all of its categories. Matthew Lopez's The Inheritance dominated the play portion of the awards including the top prize of Best Play while the new version of A Christmas Carol copped all of the design prizes for plays. Twitter exploded with complaints of racism. Some commenters stated that the Tonys were white-dominated and discriminatory since The Inheritance concerned white gay males (with a few incidental Hispanic and African-American roles) while Slave Play was told from a black perspective. Ironically, the winning playwright Lopez pointed out that he was the first Latinx playwright to win the Best Play Award in Tony history and that his community needed more representation on Broadway.
Read more »
Posted by david.sheward at 2:52 PM No comments: 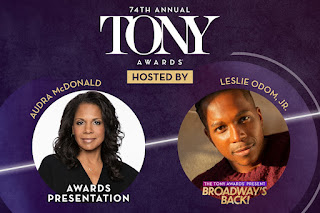 After a year and a half, the long-delayed Tony Awards will finally be presented tonight. When all the Broadway theaters shut down in March 2020, the accolades were in limbo. The Drama Desks, Outer Critics and Obies decided to honor the achievements of the abbreviated 2019-20 theater season either online or by press release in the late spring of 2020. But the Tonys dithered for months, probably because they wanted to wait until all the theatres could be reopened to maximize the publicity value. I can't really blame the producers and Charlotte St. Martin, president of the Broadway League, for this. The COVID shutdown has devastated the industry and they need all the TV coverage they can get to lure a outbreak-weary public back into the seats. I have seen one Broadway show (Pass Over) and a few Off-Broadway ones (Fruma-Sarah, What Happened, The Last of the Love Letters and Sanctuary City) since the shutdown. Everyone has to show a vax card or app and wear a mask. It's still a bit scary because there are reports of even vaccinated people becoming infected with the new variant.

I can also understand the controversial programming decisions for this weirdest of all Tonys. For the first time in decades, the majority of the awards presentation will be not be available for free on broadcast TV. From 7-9PM EST almost all of the awards will be handed out in a ceremony hosted by six-time Tony winner Audra McDonald on Paramount Plus, CBS's streaming service. Then from 9-11PM, there will be a "Back to Broadway" concert, hosted by Tony winner and Oscar nominee Leslie Odom, Jr. on CBS, celebrating the return of live theater with musical numbers from the nominated and long-running shows. The awards for Best Play, Musical and Play Revival will be distributed during the CBS portion (there are no nominees for Best Musical Revival). Paramount Plus is NOT free, but there is a free seven-day trial period and I'll bet there was a surge of subscriptions made by theater fans like me today. Paramount Plus will probably see a huge number of cancellations within the coming days once every Broadway baby has commented, memorized and hashed over the ceremony.

Read more »
Posted by david.sheward at 9:12 AM No comments:

Where Are We Now?

As summer ends, most of America--myself included--thought we would be in a better place by now. Trump is no longer president and we have a sane, compassionate man in his place. The corona virus was supposed to be defeated and all kinds of great legislation should have been passed. But instead, the delta variant, climate change and the Taliban had other plans. So far only one big bill (COVID relief) has passed. After plateauing, the COVID death toll is rising. Labor Day travel and the return to classrooms threaten another spike. Never mind that one of the main causes for the pandemic resurgence is vaccine hesitancy and downright denial, mostly by Republicans. (I suspect there are more than a few non-vaxxers who are refusing to get the jab just to make Joe look bad.) Biden will get the blame anyway.
Read more »
Posted by david.sheward at 3:49 PM No comments: