Since my last post, I've remembered more productions seen at the long-ago-demolished Philadelphia Playhouse in the Park: Tom Poston and Marian Mercer in Lovers and Other Strangers, Jean Marsh of Upstairs, Downstairs in Twelfth Night, Douglas Fairbanks, Jr. and Meg Wynn Owen (also of Upstairs, Downstairs) in a musical revue based on the works of James Thurber called Out on a Limb, Peggy Cass in An Almost Perfect Person, and Steve Allen and Marcia Rodd in The Wake, a play by Allen about an Irish family not unlike the actor-playwright's own in early 20th century New York. 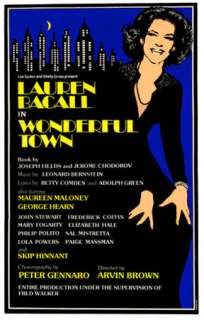 Lauren Bacall's passing reminded me I had seen her starring in a summer stock touring production of Wonderful Town at the Valley Forge Music Fair in about 1977. That type of show is pretty much gone. There are still summer stock productions, but not touring editions with stars from TV, the stage and old movies on their breaks taking out the latest hits from Broadway or old warhorses in one-week stands through the Northeast and New England. My parents used to take me to these at Valley Forge and the Playhouse in the Park in Philadelphia's Fairmount Park. There we saw Maureen Stapleton in The Glass Menagerie, Sandy Dennis in The Royal Family and Cat on a Hot Tin Roof, Jan Sterling in The Hot L Baltimore, Lynn Redgrave in The Two of Us, a collection of one-acts, Jerry Stiller and Anne Meara in The Last of the Red Hot Lovers and The Prisoner of Second Avenue, Tovah Feldshuh in Peter Pan, James Whitmore and Audra Lyndley in a play called The New Mount Olive Motel which never made it to New York, and Paxton Whitehead as Sherlock Holmes in The Crucifer of Blood. Vacant for 12 years, the Playhouse was demolished in 1997.

The deaths of Robin Williams and Lauren Bacall so close together had a stronger impact on me than most celebrity passings. Williams' suicide was so shocking, and though Bacall was 89 and her going was not unexpected, it was still very sad because she was one of my first Broadway crushes.

As with Phillip Seymour Hoffman, I had not really been aware that Williams was dealing with depression and addiction. So on Monday night it was a genuine surprise when my husband Jerry gasped as he was reading New York Times headlines on his I phone as I was driving and I said "What's the matter?" "Robin Williams died," he replied, "they think it was suicide." I had seen Williams live on two occasions, in the Broadway play Bengal Tiger at the Baghdad Zoo in which he embodied the ferocious title animal in Rajiv Joseph's bizarre dreamscape of a play, and performing stand-up on the stage of the Metropolitan Opera for an HBO special. He performed for about 90 minutes without a break and was amazing. Friends I'd met on the Long Island beach that morning had an extra ticket and I gladly took it. I arrived on time, sandy and sunburnt, while they were all late (Williams called attention to their tardiness.)

Read more »
Posted by david.sheward at 10:58 AM No comments:

There have been a lot of Broadway announcements lately. Love Letters and Side Show are getting revivals, Larry David will make his B'way debut as both actor and playwright in a comedy called Fish in the Dark, and Fun Home will move to the Circle In the Square one year after its acclaimed Off-B'way run at the Public. The oval space surrounded by audience presents interesting challenges for director Sam Gold. Fun Home will join other shows such as Urinetown, Next to Normal, Avenue Q, In the Heights, and Grey Gardens which played Off-Bway and on in separate seasons and were therefore eligible for Obies, Drama Desks and Outer Critics one year and Tonys the next. That leads to some weird differences in the awards, like Urinetown and Avenue Q getting a bunch of Tonys but no DDs. Fun Home did get the Lortel, Obie and NY Drama Critics Circle Award for Best Musical as well as the Outer Critics Award for Outstanding Off-Broadway Musical, but lost the DD to A Gentleman's Guide to Love and Murder. It's too early to tell what Fun Home's competition for the 2015 Tony will be. There will probably be a big push for Sting's The Last Ship and this year the Best Score category will definitely be on the air since the 16-time Grammy winner will be nominated. You'll recall that in 2013, Cyndi Lauper got to accept her Tony on TV for Kinky Boots, while Jason Robert Brown who nobody knows outside of drama clubs across the country, had to pick up his two Tonys for score and orchestrations of Bridges of Madison County during the commercials. Here's a rundown of the Broadway season on and Off-Bway so far:

Read more »
Posted by david.sheward at 11:05 AM No comments: