OK, here are my questions from the Conners' Halloween episode: 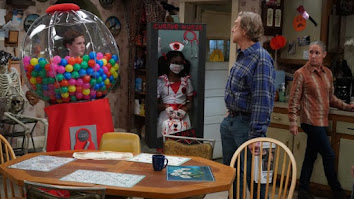 1. If they were going to be evicted last week, where did they get the money to buy elaborate Halloween costumes and props?
2. Doesn't Mary have any black relatives and why don't they pitch in and keep her company while her Dad DJ has to work so hard and stay late at his job? It seems her mother's side of the family isn't involved in her life at all. How does she feel about Black Lives Matter and living in a white household?
3. What is this new job DJ has and how did he get promoted so fast? Wasn't he begging for work and trying to set a motorcycle repair business with his dad going just a few months ago?
4. Does Ben, Darlene's boyfriend, have a job? Didn't they both decide they can't get their dumb true-crime magazine going in the time of COVID, so shouldn't Ben be looking for work? And is David still paying child support?
5. Dan still hasn't figured out that Emilio is living illegally in the Lunch Box?
6. Why doesn't Darlene write a blog to satisfy her creative writing urges?
7. If Darlene, Ben, and Becky had no money last week, how could they pay rent to Dan to save the family from being evicted?
8. The election was only three days away in the episode and nobody says who they are voting for. How come? They were all over the primary in a live episode and the 2016 election nearly split the family up (Roseanne and Jackie didn't speak to each other for months), so how come they're not talking about it except in generalities with Dan and Darlene's Big Issues Debate to cap the episode.
Posted by david.sheward at 2:14 PM No comments:

'Thanks to Amy': The Next Surefire B'way Hit

During the confirmation hearing for Supreme Court nominee Amy Coney Barrett, I had a flash of inspiration for the next sure-fire, Tony and Pulitzer-winning, non-musical hit. It contains all the elements of a snob Broadway drama, usually presented by Lincoln Center, first at the Off-Broadway Mitzi Newhouse and then transferred to the larger Vivian Beaumont after rapturous reviews. This play will have it all: interracial casting, liberal viewpoint, a single set depicting a tastefully designed living room interior of an upper-class American home, and an explosive ending. Of course, the play cannot open until the corona virus pandemic is over, but by then, the issues raised will still be relevant or even more so if Barrett is confirmed. Here's the synopsis:

Thanks to Amy, a new American play

The setting is the well-appointed living room of Supreme Court Justice Amy Coney Barrett. (NOTE This is all fictional and satirical, hon!)

At rise: Two African-American servants are watching the television news about the latest health report of 94-year-old President for Life Donald J. Trump who is on a ventilator but insisting on yet another rally to boost his ego. Back in 2020, newly-appointed Justice Barrett voted with the conservative majority to side with Trump's lawsuit to disallow all mail-in ballots because of suspected, but unproven fraud. Barrett wrote the majority opinion, establishing the precedent that the President is always right and cannot be indicted or tried for any crimes, past, present or future.

In 2024, Trump brought another suit for a third term due to interference with his first term from nefarious Democrats and enemies of the State Barack Obama, Hillary Clinton, Joseph Biden, and Nancy Pelosi. (All named in the suit have fled to Canada.) Again, the Supreme Court sided with Trump. In 2030, Trump brought another suit demanding to be named President for Life just like his pals Putin, Xi, Kim Jung Un, Duarte, etc. Again, Barrett sided with the majority.

Read more »
Posted by david.sheward at 11:12 AM No comments: