More recaps and reviews of The Carol Burnett Show based on clips, segments, etc. from the previously unavailable first five seasons.

Season Three:
Jan. 10, 1970: Nanette Fabray, Nancy Wilson
Venerated jazz singer Nancy Wilson appeared on several episodes and I believe she was a regular on a short-lived, now-forgotten summer comedy series called Comedy Tonight which starred Robert Klein, Peter Boyle and Madeline Kahn. She and Carol are great together in a duet of that 1960s song "Come on People Now" (I think that's what it's called). Nancy cracks up during As the Stomach Turns with Nanette as a kleptomaniac, Harvey as a prissy theater person (again!) and Vicki as Marion's missing daughter showing up with a baby which Nanette steals and dumps in her shopping bag instead of Carol dumping it in the umbrella stand (as usual). For the finale, Carol, Nanette and Nancy don hippie outfits and pretend to be young girls singing about being hip mothers smoking, drinking, and doping with their babies.

Someone is deleting episodes of The Carol Burnett Show from YouTube. While I was on vacation in Mexico, I found several episodes from the first five seasons. Most were posted by the same person, but now they are gone. The person may have been contacted and told to delete them for copyright violations.

Season Two: Nov. 25, 1968: Garry Moore, Durward Kirby
Found on YouTube. Garry Moore was at one time a major TV personality, hosting his own variety series as well emceeing the popular panel show I’ve Got a Secret. Carol first hit it big on Garry’s
show where Durward Kirby was his second banana. I knew Moore best as the host of the syndicated To Tell the Truth which used to come on every afternoon at 5:30 with Bill Cullen, Peggy Cass and Kitty Carlisle. Durward I only knew as the punchline of a joke on Rocky and Bullwinkle when the moose and squirrel were searching for the famed chapeau, the Kirwood Derby (Get it?) Here Carol pays tribute to her mentors by having them on as guests. In this segment she reprises two classic sketches from the Moore show, the Princess of Moravia and the safety first skit. In the former Carol is a monarch filming a toast and drinking wine in honor of a dignitary. She gets drunker and drunker while Garry as the newscaster tries to get her to sober up. In the latter sketch, Carol is a secretary to safety executive Durward who ironically burns her with his cigarette, stabs her with a pencil, pours hot coffee on her and ultimately pushes her out of a window. Would such physical violence get laughs today? In another sketch, the Old Folks Burt and Molly are visited by Garry and Durward in drag as two old biddies who enjoy a nip now and then. The four exchange jokes about Humphrey and Nixon who just won the presidency. The irony drips as Nixon is praised as a poor boy rising from nothing to become Chief Executive. (I don’t know if this sketch was not shown on MeTV for being dated.) Additional strange topical references include a pre-Jeffersons-Isabel Sanford as Blondie demonstrating integration on TV shows and an African-American newscaster calling his Caucasian co-anchor Whitey. So that they have something to do Vicki and Lyle strum guitars and sing a duet of “Call Me,” making me think of telephone commercials. Lead dancer Don Crichton is given a featured finale spot with film clips of him with Julie Andrews in the then-current film Star.

As the summer dwindles down, the number of announcements for the upcoming Broadway and Off-Broadway season begins to pick up in volume. In the past few weeks, eight new shows have been confirmed for Broadway runs plus a number of Off-Broadway productions have been released or we’ve gotten more information on casting and dates. There was concern in some quarters that there were no new musicals featuring original scores on the Broadway schedule. Only tuners with catalogues of legendary musicians such as Bob Dylan (Girl from the North Country), Tina Turner (Tina: The Tina Turner Musical), Alanis Morrisette (Jagged Little Pill), David Bryne (American Utopia), and everybody whoever wrote a hit song in the last 40 years (Moulin Rouge), were to be on the boards. But now we have four tuners eligible for the Original Score Tony. 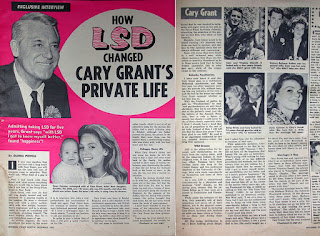 The weirdest and most interesting sounding one is neither a jukebox musical nor an adaptation of a hit movie. Flying Over Sunset focuses on the unlikely trio of  movie icon Cary Grant, playwright-diplomat Clare Booth Luce (The Women), and author Aldous Huxley (Brave New World). What did they have in common? All three experimented with LSD. The show, set in the 1950s, chronicles their experiences during crossroads in their respective lives. James Lapine, librettist-director of such groundbreaking works as Into the Woods, Sunday in the Park with George and Falsettos, writes the book and stages with Tom Kitt (Next to Normal) composing the music and Michael Korie (War Paint, Grey Gardens) writing the lyrics. David Yazbeck (Prince of Broadway, On the Town) is Grant, Carmen Cusack (Bright Star) plays Luce, and Harry Hadden-Patton (My Fair Lady, Downton Abbey) is Huxley. Previews begin March 12, 2020 at Lincoln Center’s Vivian Beaumont Theatre with an April 16 opening set. Sounds totally different from your typical Broadway fare.

Read more »
Posted by david.sheward at 10:45 AM No comments: 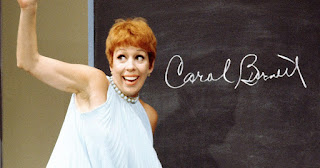 More reconstruction and reviews of The Carol Burnett Show from MeTV, YouTube, and Amazon Prime, so I don't have to spend hundreds of dollars on DVDs. In watching these reruns--both the ones I remember and those I've never seen--the more outlandish satiric sketches such as the old-movie spoofs and As the Stomach Turns, the soap opera parody, hold up better than the sitcom or one-note bits like Carol and Sis or Zelda and George. I also noticed that these variety shows afforded performers an opportunity to burnish their brands and become better known to the entire American public. Everybody knew these people. With today's niche marketing, the youth market only knows hot pop and rap singers, while older folks like me are ignorant of them.

MeTV is now into Season Five of The Carol Burnett Show. That was the last season that contained previously unreleased material. Season Six marked the start of the episodes in the syndicated Carol Burnett and Friends which began airing when the series was still on CBS in its 11th and what would become its last season. So will MeTV continue with Season Six once they reach the end of the "Lost Episodes" or will they go back to the beginning of Season One? I hope they do the latter because I didn't start watching until just recently. They began the reruns in April when I was busy teaching high school. I'd hate to have to go through six more seasons before they went back to the start.

SEASON FOUR
Oct. 12, 1970: Nanette Fabray, Ken Berry
Found on YouTube. Mostly routine sketches. Once again Carol and Nanette are secretaries competing for boss Harvey's attention as they did in a Season One show. The Old Folks was a recurring bit with Carol and Harvey as senior citizens. Harvey always wants to have sex, grabbing Carol's knee and Carol shuts him down with a wisecrack. This time, for variety, the pair are vacationing in Florida and the sketch ends with a sweet song. Ken Berry sings "Mister Bojangles" in an elaborate production number with the dancers.

Read more »
Posted by david.sheward at 8:14 AM No comments:

In 2013, I wrote a blog post about my love of The Carol Burnett Show and how much I enjoyed viewing clips from the show's 11-year run on YouTube. At that time, the first five seasons were not generally available because a different company had the rights to those shows while the the ones from seasons 6 to 11 played endlessly in syndication in half-hours called Carol Burnett and Friends. These shows I remember because they are from the days I was old enough to stay up late and watch Carol on Saturday nights at 10PM. Only recently have the earlier episodes became available in a DVD collection called The Lost Episodes (it only includes 16 episodes out of over 100.) That was about two years ago. I knew if I waited long enough I would not have to shell out a couple hundred bucks to buy this massive collection. Amazon Prime has been streaming 13 of these segments and this summer MeTV has been rerunning them at 11PM in half-hours just like Carol Burnett and Friends, expect they have occasionally included the musical numbers which the former packages excised. They even sometimes stretch a single one-hour original show over two 30-min. blocks, but still leave some things out so they can sell more elder-targeted products like medication, insurance, walkers, wheelchairs, med-alert bracelets, and canes.

Lately, I have been DVRing the MeTV shows so I can fast forward through these ads. (I only started this recently and MeTV has just finished with the fourth season, so I must wait till they start over to get to the first three seasons.) I also just finished reading Burnett's In Such Good Company: Eleven Years of Laughter, Mayhem, and Fun in the Sandbox which includes a complete list of all the episodes and the guest stars and writers. Some fragments of these early shows are vaguely familiar, but most of them I'm sure I have never seen before. It's like discovering long-buried comedy treasure. So through YouTube, MeTV, Amazon, Carol's book and my own memory, here is a breakdown of all the episodes I've been able to recreate so far and my reviews of them.