Since my last Broadway update, several more shows have announced firm opening dates and one has leapt ahead of all the others. Hadestown, the 2019 Tony Best Musical, will reopen its gates at the Walter Theater on Sept. 2, nearly two weeks before the big-ticket, box-office blockbusters Hamilton, Lion King Wicked, and Chicago do on Sept. 14. It seems an odd choice since the earlier date falls before Labor Day and the Jewish holidays, a traditionally slow time for theater going. The Hadestown producers may be counting on the pent-up demand for theater since we will have been starved for it for a year and a half. Perhaps more shows will follow and announce early openings, hoping to beat the Hamilton-Lion King-Wicked bandwagon. Of the opened shows which shuttered because of the COVID pandemic, we still have to hear from The Book of Mormon, Harry Potter and the Cursed Child, To Kill a Mockingbird and West Side Story about their opening dates. Unopened 2020 productions which were planning to open and now have no firm dates include American Buffalo, Plaza Suite, The Lehman Trilogy and Sing Street.
Read more »
Posted by david.sheward at 3:25 PM No comments: 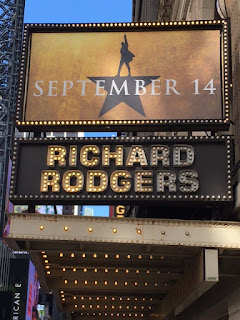 With COVID infections dropping and vaccinations reaching higher levels, the New York theater is poised to reopen after a year and a half of lockdown. Both Governor Cuomo and Mayor DeBlasio have touted that the city will be open for business this summer and Broadway has followed suit. It started with a trickle of press releases but now the floodgates have opened with multiple shows announcing their return starting on Sept. 14. On that date, the three biggest money-makers--Hamilton, Lion King and Wicked--and longest running American show in Broadway history--Chicago--are opening their doors.
There are still a lot of questions. Will audiences have to wear masks? Will temperatures be taken at the door, adding another layer of delay for just getting into the theater buildings? (Don't forget we will still have to have our bags searched.) Must theatergoers display a negative COVID test or proof of vaccination? How would that work? Will there be a phone app or a vaccine passport? And how will that be verified? Or will it just be an honor system? The CDC has just announced that the fully-vaccinated do not have to wear a mask indoors or outdoors, but what about the unvaccinated? It appears that herd immunity is a pipe dream because of variants and the high percentage of anti-vaxxers and hesitators.

But the biggest question is will enough tourists feel comfortable to squeeze into those sardine-can seats for two and a half hours for the producers to turn a profit? Several shows will be playing fewer than the standard eight performances a week in hopes of limiting supply if demand is not great.

Read more »
Posted by david.sheward at 9:56 AM No comments:

It's been a while since I've viewed any episodes of the Carol Burnett Show on the various DVD collections received as Christmas or birthday gifts or on the various platforms that display chopped-up 22 min. versions of the originals. A few weeks ago, I attempted to view missing material at the Paley Center in Manhattan, but it's still closed for COVID. In the first 15 installments of this series, I just went after episodes that contained sketches that interested me, such as all of Carol's brilliant movie parodies or segments from the first five seasons previously unavailable. So, until the Paley Center re-opens, my only option is to go back to my DVDs and online and analyze the episodes I haven't gotten to yet, perhaps in chronological order. Maybe I'll find unexpected gems.

Season One
Sept. 11, 1967: Jim Nabors
Carol's very first show in its entirety is contained on both the Best Of and Lost Episodes collections. There's nothing particularly outstanding here, expect, obviously, for a bunch of firsts. The debut of Jim Nabors' annual premiere appearance of each season, the first Carol and Sis sketch, the first Q&A with the audience, Carol's first awkward drooling over Lyle, etc. During the opening, we learn the show is on opposite I Spy and The Big Valley and Carol jokes that she might have Pearl Bailey on so they can do a take-off on I Spy's interracial casting. (This idea was done later with Carol and Barbara McNair.) Carol does the first of many VIPs mock interviews with Harvey as a newscaster. Here she is Shirley Dimple and there are gag references to the foray into politics of the real-life Shirley Temple and other show-biz has-beens like George Murphy and Ronald Reagen. The most interesting and revealing bit comes during Carol's Broadway duet with Jim. After partnering on songs from West Side Story, How to Succeed, and Annie Get Your Gun (with Carol imitating Merman), they switch gender roles and Carol warbles Billy Bigelow's Soliloquy from Carousel. Naturally, this leads to Jim holding his hands primly and intoning "When I Marry Mr. Snow." The audience laughs at the absurdity of big, tall Jim acting like a coy girl. But Nabors' gay sexuality makes the joke doubly significant. Especially when Carol then asks "What about Rex Harrison?"
"Well, I guess he'll do if I can't have Mr. Snow," Jim replies. Were Carol and Jim winking at the audience and having a laugh between themselves about Jim Nabors' really wanting a Mr. Snow of his own?
Read more »
Posted by david.sheward at 3:11 PM No comments: