I recently viewed Elizabeth Taylor at two vastly different points in her career via two media platforms. The Sand Piper (1965) flew to me on a DVD from Netflix. Only a small handful of classic "old" films have found their way to the streaming service--mostly with Marilyn Monroe because she trends--but you can get almost any film ever made on the DVD mail-in deal. The Last Time I Saw Paris (1955) has been in public domain for many years and a low-grade print of the entire film is available on YouTube. It's even on a cheap DVD of Hollywood "classics" you can buy at Walmart. Of course Taylor is ravishingly beautiful in both films, but her acting veers from tolerable in Paris to execrable in Sand Piper. Also in both, she plays unconventional women in tragic relationships.

Read more »
Posted by david.sheward at 1:22 PM No comments:

Ripped Apart: Thoughts on America in 2017 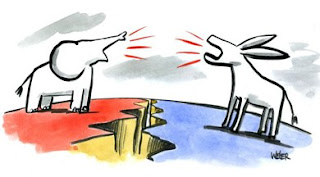 America is being pulled in two directions. The forces of reaction and conservatism want to drag us into the past, while progressives seek to continue the march to the inclusive future. The election of Donald Trump exemplifies this split, it was definitely a reaction to our first black president. Not everyone who supports the Orange Man Baby is a racist, sexist pig, but there is a significant portion of his base that wants us to travel back to the 1950s or even further. No pesky government regulations on air and water pollution. No political correctness to force us to consider the feelings of women or minorities who should know their place. No gay marriages. Back to the closet, y'all. No Happy Holidays crap.