With the coronavirus shutting down Broadway, sports, and theme parks, I'm grateful I went to Orlando a few weeks ago and I was able to enjoy Walt Disney World and other attractions. To distract you from quarantines, social distancing, and Trump's incompetence, here's a continuing rundown of the trip with my brother Jonathan.

Our plan for the fourth day was to get up at dawn and try once again for Star Wars: Rise of the Resistance at Hollywood Studios. But after three straight days of nonstop rides and park-hopping, we were both kinda tired. It was decided to take it easy and relax by the hotel pool for a while, then decide. There was one day left on my Disney four-day ticket and an extra day was built into our schedule. The Marriott Courtyard had a lovely breakfast, though it wasn't free. The pool and jacuzzi were stress-relieving. We decided to take a break from Disney and head to SeaWorld at noon after a mellow morning. The hotel concierge, a nice lady with a Southern accent, got us discount tickets. I had wanted to go since I had never been and the crowds were supposed to be much less than at WDW. 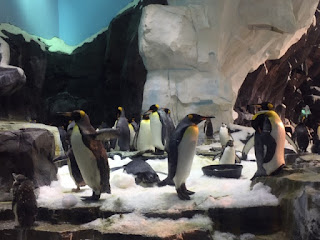 It turned out to be a wise decision, we got on a lot of rides with almost no waiting time. The SeaWorld equivalent of Fast Passes proved to be unnecessary since the lines were all short. The only attraction to have a significant waiting time was Antarctica: Empire of the Penguins. You enter an ice-covered cave and watch videos of the life of the cute little tuxedo-clad birds. Then a ride in frozen cart through an Antarctic snowscape (you chose intensity level) and you wind up in a chilly enclosure with hundreds of real penguins. These are my favorite animals and it was fun to watch them swim and frolic.

Three super-intense roller-coasters followed. All more gut-wrenching than anything at Disney. (Disney is geared towards having families enjoy all their rides while SeaWorld and Great Adventure want teen and young adult thrill-seekers.) Journey to Atlantis takes you on a calm, soothing boat trip through gorgeously appointed chambers recreating the lost continent before plunging you almost perpendicularly down two waterfalls. Kraken and Mako twisted and shook me with teeth-jarring speed. We were turned upside down and shot through loop-de-loops, screaming all the way. At one point I bellowed, "This is refreshing!!!"

Lunch at the Spice Mill Restaurant was at least generous and then we strolled to Sesame Street Land. SeaWorld had recently acquired the rights to the lovable muppet characters and created this area geared towards little children. The rides were pretty tame, expect for Super Grover's Box Car Derby, a kiddie roller-coaster which gave me a headache more than the Kraken or Mako. Slimy's Slider, based on Oscar the Grouch's worm friend was kinda fun.

We ended the day with Orca Encounter, a show featuring performing killer whales. I don't know if it's cruel to the mammals or not, but there was information about efforts to study and preserve them interspersed between splashing and hoop jumping. 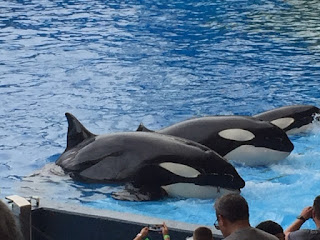 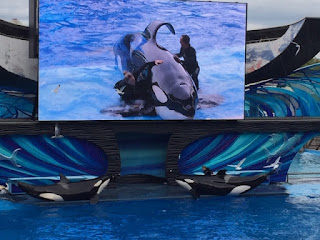 Posted by david.sheward at 8:35 AM