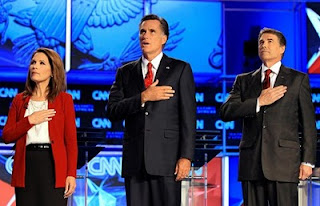 Obama is in real trouble. I have serious doubts he'll be able to get re-elected. The voters in the middle who have no political convictions and don't pay attention to politics are seeing him as a weakling who kowtows to the right and isn't getting the economy moving or creating jobs. They don't care that the Republicans only want to make the rich richer.

Right now Rick Perry, the Neanderthal governor of Texas--who doesn't even acknowledge the existence of Neanderthals because he doesn't believe in evolution--is looking attractive to the middle. "Oh, we like him," they say when they are looking away from American Idol or NASCAR, "He'll get us a job at Walmart or the 7-11. I don't like what he says about Social Security, but at least he doesn't back down or change his stand on things like that flip-flopper Romney or that wishy-washy Obama. I want a strong president who will keep me in line." Never mind that if Perry gets elected, everyone will be forced to buy a handgun, no one will ever be able to get a legal abortion, gays will be locked up, and Social Security and Medicare will disappear. These are only slight exaggerations.

Here's an interesting revelation that came out of that Tea Party debate. When Michelle Bachman suggested the only reason Perry made an executive order that all schoolgirls get a vaccination to prevent cervical cancer it was because the pharmaceutical company Merck had given him a contribution. He replied that he raised several million dollars and Merck had only given him $5,000 and he was insulted by her idea that he could be bought for such a piddling amount. It's very telling that he said he insulted not because of the suggestion that he could be bribed, but over the size of the bribe. The implication being he can be bought, but for a helluva lot more than 5K. It's been revealed Merck actually contributed $30,000 and also gave to the Republican Governors Association of which Perry is in charge.

Sidenote on Bachmann: Instead of shutting up when she had a good point, the Wicked Witch of Minnesota shot herself in the foot by making wild and unfounded claims that the vaccine was dangerous. In subsequent interviews, she repeated an anecdotal story about a grieving mother whose daughter had contracted mental retardation because of the shot. The medical community says there is no evidence of such a side effect. This shows Bachmann will make any irresponsible statement to advance her bid for power.

Another horrible incident during these Republican debates was the "death" scream moment when Tea Party enthuisasts supported leaving uninsured Americans to die rather than have the government pay for their treatment. Moderator Wolf Blitzer asked Ron Paul about a hypothetical case of a healthy young man with a good job who decided not to have any insurance because he just doesn't want to pay the a few hundred dollars a month in premiums. Blitzer asked what if this guy goes into a coma, should he just be left to die? People in the audience cried "YEAH!" Paul did not actually say he should perish, but that the church and charities should deal with such cases as happened when he was practising medicine. What fantasty world does this Ron Paul live in? Does he think every community is like "It's a Wonderful Life" where the town rallies round poor Jimmy Stewart when he's down on his luck? Paul Krugman rightly said in his NY Times column (too lazy to put in the link, look it up yourself) that such cases of being uninsured through stupidity or fecklessness are not really relevant. Far more common are instances where people can't afford insurance though they have jobs (like the low-paying ones Rick Perry is so proud of in Texas) or were turned down for a pre-existing condition (which supposedly will be illegal thanks to the hated Obamacare). If that were the question, those Tea Partiers still would have cried "YEAH!" to letting the uninsured drop dead on the streets.

Krugman points out this chilling lack of compassion shows there is no basic agreement between left and right that government should provide minimal support of those who are experiencing bad luck or trouble. If you lose your job, if you can't afford insurance, if you're not a go-getter, tough shit according to the new Right. Forget welfare, no more unemployment, social security, medicare, or anything for you.

Here's what I think is going to happen. Perry will continue to surge and he might take a few primaries, but he will sputter out and look like an extremist and therefore unable to win in the general election. He could beat Obama, but it's not a sure thing. I think cooler heads will prevail and Romney will be seen as reasonable and attractive to independents. Hey, they'll say, he's not some evangelical who doesn't believe in science. He'll create jobs cause he's been in business. Never mind that Massachusetts was near the bottom in job growth when he was governor. Forget that when he took over a company, they fired everyone. Romney will get the nomination and it will be close, the odds are he will beat Obama. Then we'll have this blow-dried, phony, plastic, CEO president. I can't really blame those middle-people who are leaning towards the right. They don't see Obama as standing up and fighting hard enough and they are right.
Posted by david.sheward at 10:30 AM No comments: 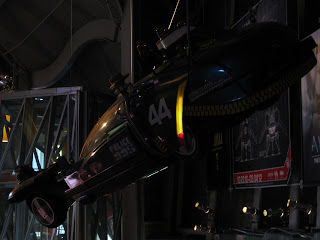 I'm glad I didn't panic and cancel my ferry ride to Seattle. Everything worked out and I had a nice time. The city is very much like San Francisco, lots of hills. I thought it would be an easy walk from the port to my hotel, but it was a cardio workout of a climb. I had a reservation at an inexpensive hotel next to a hospital, so my view was of sick people, lying in their beds. I took a bus tour which gave me an overview--the only thing I knew about it was that TV show from the 1960s called Here Come the Brides and the theme song---"The bluest skies you ever seen in Seattle/Like a beautiful child/Growing up free and wild." And I would run around and act like a savage and say, "I'm the beautiful child in Seattle." Anyway, it's a nice, charming city where everyone drinks coffee all the time. I saw the original Starbucks and the famous space needle--immortalized in the famous issue of Adventure where the Legion of Super-Heroes visits an anti-gravity restaurant on Jupiter, which is modeled on the space needle. (This was the one where Superboy, Ultra Boy, Chameleon Boy and new Legionnaires Chemical King and Timber Wolf disguise themselves as super-outlaws to infiltrate a school of villains.) Next to the space needle is a museum specializing in science fiction and rock music. They had an exhibits on Battlestar Galactica and Avatar as well as the futuristic car Harrison Ford drove in Blade Runner. (pictured)

Then I had a great seafood dinner on the wharf, walked through the Market Square and went back to the hospital-hotel. Then next morning I got up early to take the ferry back to Victoria where I would have about 90 minutes before I had to get on the bus to Nanaimo where Jerry was having his conference. I had rushed through Victoria at the other end in order make the ferry to Seattle, so now it was nice to have some time there. It had a pretty harbor and some quaint shops.

I got back to the hotel in Nanaimo and watched some episodes of Horders and decided to clean up once I got home. The next day was our last on vacation before flying home. We wandered around Nanaimo which was having a car show and I bought some old sci-fi novels at a used book store. Will Kindle eliminate those stores? I still love getting old books for a dollar and reading cheesey s-f.

Rather than taking a ferry all the way back to Tswassen and then a long cab ride to the airport in Vancouver, we took a tiny float plane and stayed in an airport hotel since we had to get up quite early for our flight. That was fun. (pictured) But the trip from Vancouver was a pain. We were supposed to take a small plane to Seattle and transfer to NY. But our plane had a mechanical problem and we had to get a new one which meant missing our connection. We had several problem booking a new flight and worred we'd have to stay in Seattle, but it worked out and I watched Design Star on the TV in the set in front of me while drinking wine from tiny bottles. 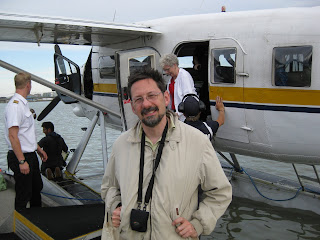 Posted by david.sheward at 9:50 AM No comments: