Just yesterday, my husband and I were driving back from Philadelphia after a visit to my mother for Thanksgiving. For some unknown reason, I got the urge to listen to Sondheim. We had not been listening to the radio news, so I didn't know about his death. I punched his name into the Spotify search engine we heard A Little Priest, Another Hundred People, The Ladies Who Lunch, The Miller's Son, Hello, Little Girl, and Now You Know. A loving and unexpected tribute to the greatest musical theater writer of the 20th century. Then we get home, I opened my computer and got the shocking news.

He was 91, so it wasn't unexpected and he did go out on a high note. There are new productions of Assassins and Company playing as well as a new film version of West Side Story about to open. In addition, he was working on a new show, Square One, with David Ives. He recently revealed on Stephen Colbert's talk show, it had just been workshopped with Nathan Lane and Bernadette Peters and he was hoping for it to open on Broadway next season. Let us all pray that comes to pass.

Read more »
Posted by david.sheward at 9:53 AM No comments:

The previously announced revival of Ntozake Shange's for colored girls who have considered suicide/when the rainbow is enuf has set definite dates and a theater. The new production of the long-running "choreopoem" will begin previews on March 4, 2022 at the Booth Theater where it debuted on Broadway in 1976 and ran for 742 performances.
Tony nominee Camille A. Brown (Once on This Island) who recently made history as the first black woman to direct a production at the Metropolitan Opera with Fire Shut Up in My Bones, will direct and choreograph for colored girls. Brown choreographed the 2019 revival at the Public Theatre (which was directed by Leah C. Gardiner)
“Of all the shows to be given as an opportunity to debut as a first-time Broadway director and choreographer, for colored girls… feels like a gift,” said Brown in a statement. “I’m thrilled that I’ve been entrusted to combine all the parts of myself—dance, music, and theatre arts—to shape and share this timeless story again with the world.”
Read more »
Posted by david.sheward at 3:56 PM No comments: 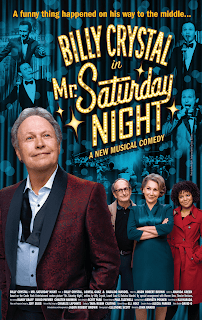 Billy Crystal and Audra McDonald will return to Broadway after long absences. Crystal will star in and co-author Mr. Saturday Night, a new musical based on the 1992 film comedy in which he played Buddy Young, a once famous TV comedian looking for a comeback in his old age. The musical, featuring music by Jason Robert Brown, lyrics by Amanda Greene and a book by Crystal, Lowell Ganz, and Babaloo Mandel (who also collaborated on the screenplay) will begin previews at the Nederlander Theater on March 1 with an opening on March 31. David Paymer will recreate his Oscar-nominated role as Buddy's brother and manager. Also starring will be Tony winner Randy Graff (City of Angels, Fiddler on the Roof) and Chasten Harmon (The Good Fight, Elementary). Tony winner John Rando (Urinetown) directs. The show recently had a presentation at the Barrington Stage Company in Massachusetts.
Read more »
Posted by david.sheward at 9:51 AM No comments: