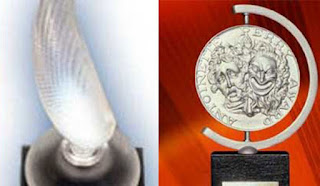 Just like last year the Tony and Drama Desk Awards are going to be very different. In 2017, Dear Evan Hansen and Natasha, Pierre, and the Great Comet of 1812 dominated the Tonys, but were ineligible for the Drama Desks because they were in the running for 2016 because of their earlier Off-Broadway runs. The Tonys are only for Broadway shows and the Drama Desks include on and Off. Usually the DDs and Tonys results are pretty similar because the DD voters tend to go for Broadway shows. (The Tonys are voted on by 841 industry insiders including producers, directors, designers, actors, stage managers and a few critics who belong to the New York Drama Critics Circle, while the Drama Desks are voted on by about 100 theater reviewers, editors and reporters.) This year, The Band's Visit is the likely Tony champ, but it played Off-Broadway at the Atlantic Theatre Company last season, taking home several 2017 DD Awards as well as the New York Drama Critics Circle Award for Best Musical. In addition, several Broadway performers and creative personnel who received Tony love are absent from the DD list, particularly Lauren Ambrose and Norbert Leo Butz of My Fair Lady (the seven-member DD nominating committee didn't seem to like Bartlett Sher's Lincoln Center revival of the Lerner and Loewe classic.) Ambrose won the Outer Critics Circle Award for Outstanding Actress in a Musical for her scrappy Eliza Doolittle and Butz took the OCC Best Featured Actor in a Musical for his boisterous Alfred Doolittle. Harry Hadden-Patten's Henry Higgins is in the running for both a DD and a Tony.

Here are my predications for both awards. The Drama Desks will be presented on June 3 and the Tonys the following week on June 10.

Best Play
Tony: Harry Potter and the Cursed Child, Parts One and Two
Drama Desk: Admissions
Harry Potter isn't even nominated for the top DD play category. In fact, all of the DD outstanding play candidates are Off-Broadway shows. This will be one of the few times the DD award goes to a non-Broadway show. In the over 40 years since the Drama Desk began given out Best Play awards, they have only done it six times. The rare past exceptions are Tribes (2012), Ruined (2009), Wit (1999), How I Learned to Drive (1997), Marvin's Room (1992), and A Lie of the Mind (1986).