Season One: Sept. 18, 1967: Sid Caesar, Liza Minnelli
While scrolling through YouTube during an idle moment, I came across a long-missing sketch from the first season of the The Carol Burnett Show. It's a parody of Star Trek which was a brand new show at the time. The voice of Lyle Waggoner announces we are in for another thrilling episode of Space Trip in which the starship Intrepid boldly searches the galaxy for a higher TV rating. Harvey enters dressed in a bright red tunic with a lighting bolt across his chest as Captain Quirk. (He doesn't attempt a William Shatner imitation, probably because the actor's annoying mannerisms and weird pauses have not solidified as of yet with the viewing public.) Guest star Sid Caesar enters as Mr. Spook and the audience laughs at his freakishly huge ears. There is comic business as Spook attempts to tune in to a vital message from earth. The communication relays that a dangerous bomb in the form of a robot is floating around in space, so don't pick up any hitchhikers. At the moment, Carol floats by dressed alluringly in metallic fashion thumbing for a ride. Spook unwittingly brings her on board and she seduces him in order to blow up the ship.
Read more »
Posted by david.sheward at 12:28 PM 3 comments:

The Biden administration is not the only great new thing in 2021. MeTV has revived the tradition of Saturday morning cartoons with a three-hour block of Popeye, Tom and Jerry, and Bugs Bunny. The nostalgic network also has a Monday-through-Friday one hour show called Toon In with Me featuring animated shorts from all three buckets spanning several decades. There's a host (Bill the cartoon curator) and a puppet (Toonie the Tuna) as well as two supporting players performing bits in between the cartoons.

The series evoked memories of my childhood Saturday mornings when the three broadcast networks ran cartoon programming from 7AM to 1PM. Of course, we watched every moment in our pajamas starting with Bugs Bunny reruns on ABC until the horrible Kukla, Fran and Ollie live-action foreign film festival on CBS at about 1PM. Then we had to do our homework or get out of the house, one or the other. This was in the late 1960s. The shows and their schedules have overlapped in my memory, but the clearest ones were the super-heroes. This was the era of the cultural dominance of the prime-time Batman series so there were a slew of super-powered good guys, often satirically portrayed. Here's a rundown of my favorite shows of this genre:

Frankenstein Jr and The Impossibles 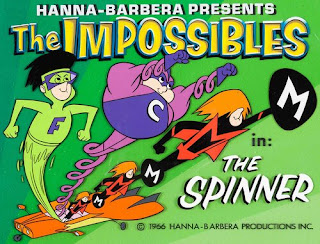 I've written about this series in previous blogs, but it still remains a favorite. Combining the superhero craze of the late 60s with the pop-rock fad, the Impossibles were a mop-top teen singing trio who are also secretly super-heroes--Fluid Man, Multi Man and Coil Man. Though how they acquired their powers and their real identities are never explained, it hardly matters. Every episode featured the guys at a gig being interrupted by their chief, Big D, giving them a crimefighting assignment. The main joy was the insane super villains they encountered each week such as Mother Gruesome, Televisitron, The Twister, The Spinner, Smogula, Dr. Futuro, Crunella Critch the Creepy Witch, etc.
Frankenstein Jr. was a giant robot invented by annoyingly precocious boy scientist Buzz Conroy. Together the duo faced a similar slew of diabolical law breakers. I always preferred the Impossibles who got two episodes per week to Frankie and Buzz's one. But I have grown to appreciate the futuristic background of the latter series.
Read more »
Posted by david.sheward at 2:39 PM No comments: