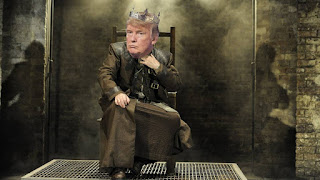 My Shakepearean tragedy of McTrump is nearing its end. Well, the end of his presidency anyway, since the Trump administration is finally drawing to a close but the Orange Pig is determined not to go gentle into that good night. I started the satire right after Trumpy was inaugurated in 2017 with previous David Desk blog posts, and included references to the Scottish play, King Lear, Hamlet, Julius Caesar, and Richard III. Links to Act I, Act II, Act III, and Act III, Scene 2.

Here is the Fourth Act of McTrump

Scene: The White House and McBiden's home in Delaware on opposite sides of the stage, McTrump is being armored for battle by Giuliani, his groveling, troll-like toady.

McTrump: I have no fear of McBiden. The weird sisters prophesied that no man of liberal born could defeat me. Also that I need not tremble until mailboxes and ballots move to Washington. And that will never be.

Giuliani: Aye, my lord, thou art invincible. Armed with the might of rumor, lies and deceit, thou shalt reign in this divided land another four years.

McTrump: Quiet, sycophant! Spray more tan on my noble visage, tis too pale by half.

McTrump: And you could use a touch-up on that hair. What about McBiden's troublesome offspring. Hast thou gleaned any dirt on him. Hast been to Ukraine e'en and thy expensive voyage have thus far come to naught.

Giuliani: Do not blame me for Ukraine, McTrump! I was just following orders.

McTrump: Shut up or no pardon for thou.

Read more »
Posted by david.sheward at 12:01 PM No comments: It's Christmas again and time for a Carol Burnett Show present and recap. Last year my husband Jerry got me the massive Lost Episodes collection and for my birthday last May he bought me the Best of retrospective. (Episodes and fragments from those collections have appeared in previous posts in this series of Reconstructing the Burnett series, parts 1-13). This bleak yuletide season was made a mite brighter by my 2020 present from Jerry, Carol's Lost Christmas, a single DVD with three episodes from the "lost" years of Carol's variety series. Episodes from Season Six to Eleven had been in syndication as Carol Burnett and Friends for decades, but the first five seasons were controlled by another company and have not been available until recently. This Lost Christmas collection has no bonus material or features, but does include two complete holiday episodes and one nearly complete episode. They are not the best of the series, but they do fill some holes in the Carol canon.

The previous 13 blog entries in this series have chronicled my reactions to episodes available on the DVD collections, MeTV, YouTube, Amazon and ShoutFactory! The Amazon and ShoutFactory shows are chopped up into 22 minutes. For this entry, I will cover the shows on Lost Christmas (all were watched during Christmas Day) and start to pick up the other episodes not previously mentioned in other posts. Eventually, I'd like to write about every episode available. There are some fragments still missing because of music copyright issues that I would love to find. Once COVID is under control, I plan to visit the Paley Center for Media where there are several complete Burnett episodes which were only partially viewable on Amazon, etc.

(Carol's Lost Christmas) Barbara Eden was the star of the NBC fantasy sitcom I Dream of Jeannie (1965-70) where she played a sexy genie whose only wish was to serve her master, Tony Nelson, a dull astronaut played by Larry Hagman. The comedy was supposed to erupt when Tony tried to hide Jeannie from his stuffy commander, Hayden Rourke and his snooty wife. (Perhaps someday I will write a blog comparing Jeannie and Samantha from Bewitched.) Eden did have considerable musical talent which she displayed occasionally on Jeannie. In this Christmas episode from the first Burnett season, Eden does have a fun Greek-inspired number, "Bend It," with the chorus (you can see future Tony nominee Lee Roy Reams among the boys). George Chakiris did a similar number also in Season One. Barbara's only other appearance is a short bit with Carol and Lyle where she uses her alleged magical powers to grant Carol three wishes. Carol's first two wishes are that Lyle flatters and then hugs her, but the last wish is reserved for Barbara herself when Lyle passionately kisses her. ("I gave you two out of three, Carol," Barbara quips.)
Read more »
Posted by david.sheward at 1:39 PM No comments:

I should be happy at the results of the 2020 Presidential election, but Donald Trump spoils everything. He can't even lose the right way. Instead of graciously admitting defeat and turning over the reigns of power as almost all of his predecessors did, he vomits up vile conspiracy theories, incites violence and death threats against innocent poll workers, and threatens the very foundations of our republic. And, no, MAGA morons, I am not being hysterical. An astonishing 70 per cent of Republicans actually believe his crap that the election was rigged and Biden is not the legitimate winner.
Read more »
Posted by david.sheward at 3:22 PM No comments: