B'way Update: McDonald and Shannon in Frankie and Johnny

January and February are traditionally slow months in the New York theater with few openings, especially on Broadway--only Choir Boy and True West during these first months. But there are a bunch of shows which have announced openings in March through April, that frantic period before the Tony Award cut-off date, and into May and the summer for the 2019-20 season. Six-time Tony winner Audra McDonald and Oscar nominee Michael Shannon (Revolutionary Road, Man of Steel) will star in a revival of Terrence McNally's two-character comedy-drama Frankie and Johnny in the Clare de Lune, set to open in May at a Shubert theatre to be announced. Making her Broadway debut will be director Arin Arbus (The Skin of Our Teeth). The play centering on a waitress and a short-order cook finding romance after lives of unhappiness first appeared Off-Broadway in 1988 with Kathy Bates and Kenneth Walsh. Al Pacino and Michelle Pfeiffer starred in the 1991 film version which expanded beyond the play's single apartment setting and included additional characters played by Nathan Lane, Kate Nelligan, and Hector Elizondo. Edie Falco and Stanley Tucci headlined a 2002 Broadway revival (I still remember Tucci yelling at an audience member to turn off their cell phone after it rang the second time and Falco taking a minute to get back into character.)

Read more »
Posted by david.sheward at 12:16 PM No comments: 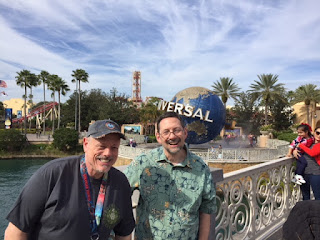 The last time I was in Orlando had to be almost 20 years ago because I distinctly remember making a joke about going down there to help count hanging chads--a reference to the heinous Bush-Gore debacle of 2000. It was also December because there were Christmas themed events and performers in holiday costumes at the theme parks. My partner and I went to Universal Studios, Islands of Adventure, and all four Disney parks. It was loads of fun so when my brother Jonathan, a huge theme parkgoer suggested we spend the Martin Luther King Day weekend at Universal, I jumped at the chance. There had been many changes in the park since I was there last, chiefly the new Harry Potter rides, and I liked Universal more than Disney. The former struck me as more adult-oriented and Disney was more for kids and families.