The trial of Donald Trump on charges of inciting an insurrection is scheduled to be held in a little over a week. In a recent procedural vote only five Republican Senators voted to go ahead with the trial, indicating there is very little likelihood the event will result in a conviction which requires 17 Republican ayes. Mr. Congeniality Rand Paul who brought the motion and other GOP toadies contend the trial is unconstitutional since Trump is out of office. "Let's just forget that he brought an angry mob to our Capitol and almost got us all killed," seems to be his message and the majority of his GOP colleagues are fine with that. But there is precedent for impeachment after a federal official has left office (US Grant's corrupt Secy. of War William Bellknap, see the previous blog post) and there are several reasons for going ahead with the trial.

1) The nation needs to see and hear all the evidence indicting Trumpy for lying to the American public about his loss to Joe Biden.

2) There has to be some consequences for his rabble-rousing and lying.

3) There needs to be a public record of Republicans approving or condemning a leader who puts his own personal political fortunes above the good of the country by scheming and plotting to vacate a free and fair election with spurious and fabricated evidence.

4) If convicted, there can be a vote to bar Trump from ever holding office again. (That's the main reason.)

With conviction a remote possibility, there is some movement for censure rather than an impeachment conviction. Tim Kaine of Virginia and reportedly Susan Collins of Maine are working on a censure resolution. Censure is not as extreme as impeachment. In essence it's a statement of condemnation. Probably the most famous Senate censure was of Joseph McCarthy, the rabid anti-Communist witch-hunter. Only one president has ever been censured--Andrew Jackson, probably the only president Trump has admired because of his populist stances. In 1834, the Whig-controlled Senate voted to censure Jackson, a member of the opposing Democratic Party, for withholding documents pertaining to his closing down the Bank of the United States. The censure was later reversed. It's not clear if such a censure of Trump would also contain language to forbid from running again. A Google search turned up several headlines with conflicts statements. Some said a censure would prevent a future Trump presidency and some said not.

So I called Tim Kaine's Senate office and actually got a live staff member on the phone. I asked her would the Senator's censure resolution stop Trump from regaining the White House or would it just be a slap on the wrist for being a naughty boy. The staffer told me the resolution was not public yet and that she couldn't say. But she did say that it would require only 60 votes as opposed to the 67 needed for conviction in impeachment. The staffer went on to say Kaine was focused on COVID relief and she couldn't give me any more information.

Read more »
Posted by david.sheward at 10:57 AM No comments: 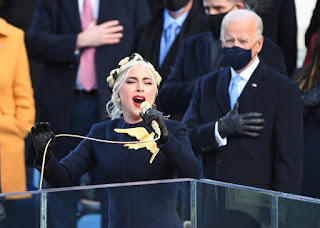 On Inauguration Day, when Brian Williams called him "President Biden" instead of "President-Elect Biden" for the first time, I nearly wept with joy. I was similarly close to tears during the singing of the National Anthem by Lady Gaga. As she got to the line "Gave proof through the night that our flag was still there," she turned to the flag waving behind her and gestured towards it as if acknowledging that two weeks ago, a mob of right-wing thugs stormed the very building where she was standing and attempted to take over our democratic government in the name of a huge, brazen lie. But the flag and our country as we know it was still there.

We have replaced a drunken uncle (Trump) with a compassionate grandfather (Biden). Yes, I know Trump does not drink alcohol but he was drunk with power, pouring gasoline on our government after covering it with the dry tinder of Twitter and fake news. Then on the morning of Jan. 6 in front of the crowd he had called to Washington and stirred up in a frenzy, he struck the match of incitement and threw it on the pile. His demurs of innocence afterwards are disingenuous at best and downright evil at worst. "Oh I didn't know this match would start a fire. I'm not a scientist." Hours into the siege he made a video and said he loved the rioters and called them "special people." His daughter called them patriots on Twitter, but quickly took that post down.

Read more »
Posted by david.sheward at 1:39 PM No comments: