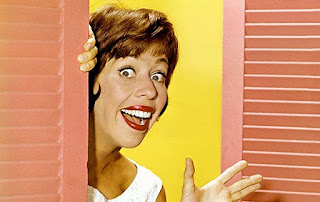 Reconstructing the missing episodes of The Carol Burnett Shows has been difficult of late. MeTV has advanced to the old Carol Burnett and Friends segments from seasons six through 11 which first aired in syndication during the last year of Carol's show. A YouTube user has been posting some of the lost segments from those first five years but some were taken down, probably because of copyright infringement issues. Amazon Prime has posted only ten segments from the Lost Episodes DVD collections. (Apparently they will be posting more but not until Jan. 22, 2020.) But thanks to a marvelous Christmas present from my husband Jerry--The Lost Episodes Ultimate Collection--I am able to continue my all-important quest of putting together as much of Carol's classic series as possible. There are several different DVD packages which Time Life puts out, so it's kinda confusing as to which one to get so you will have the most episodes. I don't understand why they don't just release them season by season. That way you'd know exactly what segments you are getting and in what order, but they probably make more money this way.

This Ultimate Collection contains 22 DVDs with 45 episodes as well as over 20 hours of bonus material including the Carol Plus 2 special with Lucille Ball and Zero Mostel as well as the entire Once Upon a Mattress special from 1972 with Carol, Ken Berry, Jack Gilford, Bernadette Peters, Jane White recreating her role as the evil Queen, and Lyle as Sir Studley (be still my heart). The collection comes in a big box containing five DVD collections--The Lost Episodes, Treasures from the Vault, Classic Carol, and two Exclusive Bonus Features sets. Each set has a accompanying booklet detailing each episode. All of the booklets have an introduction explaining why the lost episodes were lost with a funny story about Tim Conway secreting the tapes in question and Carol and Vickie force-feeding him DVDs of his failed series Rango. Several of the individual discs contain feature bonus material. I will go through the episodes not already covered in previous blogs.

In a rare case of show-biz serendipity, three-time Oscar winner Meryl Streep and Tony winner Beth Leavel, queens of their respective media, will switch roles. It was just announced that Leavel will take on Miranda Priestley the dictatorial fashion editor, in the musical version of The Devil Wears Prada which will open in Chicago in July 2021, presumably followed by a Broadway opening in 2021-22. Elton John will compose the music, Shaina Taub the lyrics, Paul Rudnick the book and Tony winner Anna D. Shapiro directs. Streep won a Golden Globe for the 2007 movie edition.

Meanwhile Streep is playing Dee Dee Allen, the washed-up Broadway star aiming for publicity by supporting a lesbian high-school student, in The Prom for
Netflix. Leavel originated the role in the stage version which was named Outstanding Musical by the Drama Desk. There is an extremely funny sight gag involving the DD Award itself. Let's hope it makes the cut for the screenplay and Netflix viewers who are not obsessed with Broadway will get the joke. The Netflix edition will also star Nicole Kidman, Kerry Washington, James Corden, Awkafina, Ariana Grande, Keegan-Michael Key and Andrew Rannells. It will be available for streaming in November.

In other casting news, the potentially controversial Michael Jackson musical, MJ, has announced its lead. The gloved one will be played by Ephraim Sykes who gave a stunning performance as David Ruffin, the most tormented Temptation in Ain't Too Proud (he got my Tony vote for Best Featured Actor in a Musical). MJ which features a book by two-time Pulitzer Prize winner Lynn Nottage, is scheduled to open at the Neil Simon Theater on Aug. 13. There is no word on how the show will address accusations of child molestation against the music legend, if at all. According to People Magazine, the story takes place in 1992 when Jackson is releasing his Dangerous album. The allegations of abuse did not begin until 1993. Convenient, huh?

Read more »
Posted by david.sheward at 6:44 AM No comments: