We are in the valley between seasons. It's the trough of summer and nothing will open on Broadway until well after Labor Day. The only hot-weather openings have been revivals of Motown (which has already closed) and Cats. The upcoming 2016-17 roster has a few highlights,  but very few new plays. Right now there are only five new plays announced--two are American and both have appeared Off-Broadway previously (Oslo and Significant Other), the other three are British or Australian (The Encounter, The Present, Heisenberg which played MTC Off-Broadway last year). The most exciting nonmusical productions are revivals with an all-star Front Page and Cherry Orchard, Jake Gyllenhaal in Burn This at the newly renovated Hudson Theatre (Broadway's 41st theater), Laura Linney and Cynthia Nixon alternating lead roles in The Little Foxes, and Julie Taymor's take on M. Butterfly.

Read more »
Posted by david.sheward at 11:20 AM No comments: 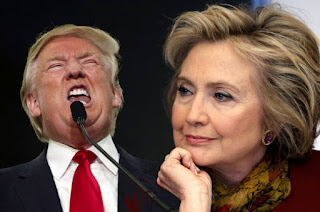 I get it. I understand how many voters are frustrated by both major party candidates in this presidential election. Let's take a look at both sides of this difficult bargain. Trump is a total non-starter, totally unacceptable even in a nightmare to be the leader of the free world. Can you imagine the havoc he would wreak. Every day he'd shoot his mouth off insulting a world leader, breaking a treaty, being "sarcastic" and we'd be on the perpetual brink of World War III. It's reached the point now where even members of his own party are disowning him. He doesn't even understand basic grammar or concepts of rhetoric. This past week, his "off-the-cuff" controversial statements on "Second Amendment people" and Obama "founding" ISIS caused violent reactions among the media and in the halls of power, and were purposefully ambiguous. He could have clarified them, but he wanted the explosions to detonate. It's his way of having fun. (He often says during his rallies after inciting violence and mocking his enemies, "Isn't this fun?")

Read more »
Posted by david.sheward at 9:32 AM No comments: