B'way/Off-B'way Update: Linda Lavin in You Will Get Sick, etc.

Updates to the upcoming fall season: Tony-Drama Desk-Obie winner Linda Lavin will return to the New York stage in You Will Get Sick, a new play by Noah Diaz beginning previews Oct. 14 at Roundabout Theater Company's Laura Pels Theater with an opening set for Nov. 6. The play focuses on a young man hiring an older woman to tell his family and friends about his life-changing diagnosis. Lavin won a Tony for Neil Simon's Broadway Bound and was nominated for The Last of the Red Hot Lovers, The Diary of Anne Frank, The Tale of the Allergist's Wife, Collected Stories and The Lyons. She won Obies for Death-Defying Acts and the Off-Broadway run of The Lyons and Drama Desk Awards for Little Murders, Broadway Bound and The New Century. She is probably best known for playing the title role on the long-running sitcom Alice (1976-85) and most recently starred on TV in CBS' B Positive...
Read more »
Posted by david.sheward at 8:50 PM No comments:

Into the Woods is now officially extending its limited run at the St. James through Oct. 16. The acclaimed revival of the Stephen Sondheim-James Lapine fairy-tale musical was originally intended to play only till Aug. 21 after its sold-out City Center run. The announcement came one day after producers of The Piano Lesson revealed they were moving the August Wilson production to the Barrymore rather than the previously announced St. James. New casting for later in the run will be announced in the coming days. What's surprising is the extension is only for another two months. Perhaps there will be another extension if the box office continues to hold strong. Woods pulled in a whopping near $2 million last week. Maybe the show could become like another Encores transfer, Chicago which is still running and holds the record as the longest-playing American musical in Broadway history. Chicago boosted its epic run with some interesting big names in replacement casting including most recently Pamela Anderson. With so many juicy roles, Woods could become star-bait and attract new audiences with each new cast.
Read more »
Posted by david.sheward at 1:55 PM No comments:

Email ThisBlogThis!Share to TwitterShare to FacebookShare to Pinterest
Labels: Broadway, Frida Kahlo, High Noon, Into the Woods, To Kill a Mockingbird 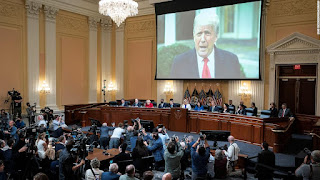 Is the perverted Trump reality show we've all been forced to live through from the past six years finally reaching its last season? Has America finally had enough of this monster some have praised as a hero? Trumpy has survived before. We thought he was out of the running for president when he insulted John McCain. We counted him out with the release of the pussy-grabbing video with Billy Bush. Shithole countries, very fine people on both sides of racism, siding with Putin over his own intelligence agencies, the botched, incompetent COVID non-response, even the violence of Jan. 6 itself weren't enough to turn his rabid MAGA base away from him. But now the Jan. 6 Select Committee has taken over the narrative and Trump has been transformed from idol of the poor, downtrodden white race to mad king clinging to power at all costs, even if it means ending our democracy itself.

To counterprogram Trump's mendacious mini-series, the Committee has staged its hearings like a better mini-series with eight episodes or hearings, each having a different focus, plot arc, heroes and villains. Unlike the Watergate and impeachment hearings which dragged out over two summers while I was in high school in 1973 and 1974, the J6 segments feature short video clips from testimony, video and visuals of emails and texts. With Watergate, we had to sit through days and days of witnesses testifying in real time. The J6 people give us bite-sized portions and intelligent speakers breaking it down to explain it. Because the stubborn Congressional Trump Republicans refused to cooperate, there are no dissenting voices to offer the Orange Mussolini's twisted version of events. It's clear that Trump intended to lead the mob in their assault on the capitol. But then what? Would he have taken Mike Pence prisoner? Burned the electoral certificates? Declared himself dictator for life? Only the secret service stopped him. And the deleted texts from their phones will reveal the whole story. Sooner or later, what was on those phones will be revealed. But that's the cliffhanger and we will have to wait for the next season to begin in September.

If nothing else, the hearings have damaged Trump enough so that his chances of being re-elected in 2024 are significantly lower. At least I hope so. What's really horrifying is so many Americans don't care that Trumpy almost overthrew our government or worse they would be OK with that.

Posted by david.sheward at 2:14 PM No comments:

It looks like Into the Woods WILL stay at the St. James and Piano Lesson will open at the Ethel
Barrymore rather than the previously announced St. James. Greg Evans of Deadline reports (as of 5:00 am this morning, July 26) the transfer of theaters. In an interview with Piano Lesson director LaTanya Richardson Jackson, the website confirms the August Wilson Pulitzer Prize-winning revival will begin preview performances at the new venue on Sept. 19 with no opening date announced as of yet. (The Piano Lesson website now lists the Barrymore as the show's home.) Woods producers have not confirmed if their smash-hit Sondheim-Lapine revival will be extending.
Richardson Jackson will be making her Broadway directorial debut and is the first woman to stage a Wilson play on Broadway. She will be directing her husband Samuel L. Jackson as well as John David Washington and Danielle Brooks. The Barrymore is the site of her Tony-nominated performance as Lena Younger in the 2014 revival of A Raisin in the Sun (opposite Denzel Washington, John David's father.) She also acted in a Broadway revival of Wilson's Joe Turner's Come and Gone. In another example of such theatrical serendipity, the Barrymore was the home for original productions of both Raisin (1959) and Joe Turner (1988). 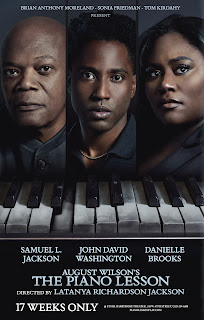 Read more »
Posted by david.sheward at 6:20 AM No comments:

Here are more broadcast masters of episodes that were unavailable on DVD or in the syndicated Carol Burnett and Friends hatchet jobs. Now you can find them on Amazon and the FreeVee service (formerly imdb's streaming platform)
Season Five:
Oct. 20, 1971: Dom DeLuise, Peggy Lee
(Previously seen on MeTV/Amazon/ShoutFactory and Reviewed in Reconstructing the Carol Burnett Show, Part Two: Carol and Dom in Antique Store; Murder Mystery with Alice Portnoy.)
The highlight of this complete episode is a game show spoof called Do or Die. Contestants can win
ridiculously lavish prizes like a key to Fort Knox or the gross national product of a European country, but the penalties for wrong answers are equally extravagant: getting shot in the leg or beheaded. Dom is the overly enthusiastic and sadistic host while Harvey as George is the contestant and Vicki is the dumb but curvaceous model. Naturally, George's wife from hell Zelda (Carol) is hauled out to help her hubby. Today, this sketch would probably be censored for its stereotyping of women as either stupid and sexy or plain and shrewish. But the extremes are pretty funny with George putting his head in a guillotine and Zelda having to shoot out a candle before the flame burns the rope holding the blade.
In the next scene, Zelda interrupts Peggy Lee's solo number and pleads with her to sing her signature hit "Is That All There Is?" When Zelda loudly munches an apple and then calls Peggy overrated, the singer gives her a karate chop. Earlier, Lee gave her smooth silky style while being shot in soft focus to Carol King's "I Feel the Earth Move" and Michel Legrand's "Watch What Happens."
Read more »
Posted by david.sheward at 5:21 AM No comments:

B'way Update: What's Up with Into the Woods and Piano Lesson?

The Encores! revival of Into the Woods is such a big hit that there are rumors it will extend beyond its relatively brief limited run ending Aug. 21 at the St. James. (Here's a link to my review on Theaterlife.com where I call this ITW the best Broadway show in 30 years.) But the revival of August Wilson's The Piano Lesson starring Samuel L. Jackson, Danielle Brooks and John David Washington is slated to begin previews at the St. James on Sept. 19. Johnny Oleksinski of the New York Post reported last week that Woods producers want their show to stay put and have Piano Lesson move to the Barrymore where Paradise Square has just closed. (Side note: Paradise producer Garth Drabinsky has been placed on Equity's Do Not Work list for "outstanding payments and benefits, and a continued pattern of abuse and neglect that created an unsafe and toxic work environment.") There has been no confirmation on Woods extending or Piano Lesson changing its venue. Tickets are not being sold for Woods beyond Aug. 21 and tickets are being sold for Piano Lesson at the St. James from Sept. 19 until Jan. 8, 2023.
Read more »
Posted by david.sheward at 2:42 PM No comments:

It was one of the worst kept secrets in recent Broadway history, but now it's official. Lea Michele will be taking the lead role of Fanny Brice from Beanie Feldstein in the current revival of Funny Girl. In addition, Tony nominee and Drama Desk winner Tovah Feldshuh will take over for Jane Lynch as Fanny's mother. Both will begin performances Sept. 6 at the August Wilson Theater. Beanie Feldstein, currently playing Fanny was initially slated to leave the show on Sept. 25, but that was moved up to July 31 with Feldstein announcing her departure on Instagram. Standby Julie Benko will play the lead from Aug. 2 through Sept. 4 and will continue for Thursday performances starting Sept. 8.

Michele was last on Broadway in Spring Awakening. During her tenure on six seasons of Glee, she often performed songs from the Funny Girl score and at one point there were rumors she would star in a production which never came to fruition. Glee cast member Samantha Marie Ware has accused Michele of creating a toxic work environment on that series. She tweeted her displeasure with the casting news.

Read more »
Posted by david.sheward at 6:33 AM No comments: