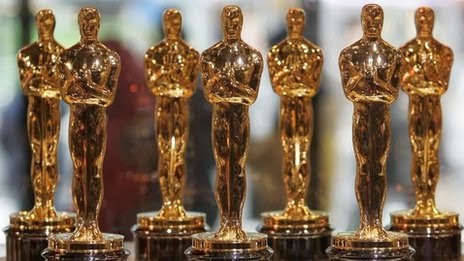 It's the weekend before the Oscars and time for my annual predictions. I always try to see as many of the nominated pictures as possible and this year I haven't done too badly, catching all of the Best Picture nominees and all but a few of the acting nominees. I have seen most of the nominated short films and only need to catch two more of the documentary short subjects. It makes me feel like a part of the evening if I've seen everything nominated. Some year, I will do it and get to all the Foreign and Animated feature films as well.

Unlike most years, there is no frontrunner for Best Picture. It's between Boyhood and Birdman. Neither is a typical, big-subject, historical epic. I think the voters will split the difference and give Boyhood Best Picture and Birdman Best Director.