In the determined hope of getting on Star Wars: Rise of the Resistance, my brother Jonathan and I rose at 5:45 am on President's Day, Mon. Feb. 17, to get to Hollywood Studios in order to be in the
park as it opened and get a position in the virtual queue with a boarding group number. My brother had to be coaxed out of bed, and even though we skipped breakfast and rushed to the park, there were massive lines at the entry gates. We got in the park at about two minutes after opening at 8 am and all the slots on the virtual queue were filled up. It was very disappointing, but not surprising. Even if we had gotten into the park at 7:30 and whipped out our I-phones at the right moment, we still might not have gotten on because the whole thing is a lottery.

We consoled ourselves with tea and coffee, then started exploring Galaxy's Edge which we had gone through the night before after visiting Epcot. In addition to the rides, there is a droid-building workshop and a Jedi Knight training session where you battle Darth Vader, but you have to be a kid to join in that. Our first fast pass was for Star Tours, Disney's original Star Wars attraction which had undergone several changes since I had ridden it 20 years ago. The idea is you are on a star cruiser piloted by
CP30. But Darth Vader appears, accusing us of harboring a spy for the resistance (a picture of one of the guest riders is then projected on the screen.) We are chased by Vader, steered by a nervous, dithering CP30, ramming into the Death Star, shooting through space, Princess Leia begs us for help, and finally we land safely. (Did I mention I have seen all 11 Star Wars films and my favorite is Rogue One, seen in Rome with Italian subtitles.)

We had time to kill until our next Fast Pass, so we decided to wait in line to one of the more popular rides Slinky Dog Dash in Toy Story Land, another area not in existence since my last visit. The whole section is filled with giant toys from the late 1960s--Tinker Toys, balsa wood airplanes, board games, etc. Slinky Dog is relatively new and extremely busy. The wait was excruciatingly long--almost two hours--but it wasn't too bad (I could have seen the Muppets in 3-D while Jonathan stood in line. I should have made him do it since he made us miss the opening by staying in bed.) Anyway, there was a nice lady in line with us and Jonathan went for more coffee, tea, and pastries for all of us. The lady was from Winnipeg and
she was also holding a place in line for her husband and two small children. Cast members dressed as green-faced combat soldiers entertained us by playing drums. The ride was fun--a sort of roller-coaster made of a slinky dog which rocks back and forth. I don't know if it was worth standing in line for close to two hours.

Our next Fast Pass was Toy Story Mania, but even with the Fast Pass, the line was a bit long. This one was remarkably like Buzz Lightyear's Space Ranger Spin at the Magic Kingdom and Men in Black at Universal where you shoot at targets for points with a cute little gun.

At some point we encountered Frozone from The Incredibles (voice by Samuel L. Jackson in the movie). It was a nice change to pose with a Pixar character rather than a Disney one.

Before our lunch reservation at the Sci-Fi Dine-In Theater, we took in Voyage of the Little Mermaid, a condensed 20-minute version of the movie and Broadway show combining film, puppets, special effects, actual rain, and live actors who actually sang rather than lip-synched. The young actress playing Ariel had a lovely voice and held her own against a gigantic Ursula machine. The presentation was fast-paced and entertaining, but


I was looking forward to having lunch at The Sci-Fi Dine-In Theater since Jerry and I had a ball there 20 years ago. This ingenious eatery is a recreation of a 1950s drive-in where you much on huge hamburgers and fries sitting in cars while watching cartoons and previews of cheesey sci-fi movies on a 30-minute loop. I'm pretty sure the content has not changed since my last visit. The clips included several trailers of films I've actually seen on Mystery Science Theater 3000 such as Horror of Party Beach and Rifftrax such as Cat-Women on the Moon. There was also a Tom and Jerry short, the Tex Avery-directed The Cat Who Hated People, and a Disney cartoon about a secretary kidnapped by grotesque aliens. She turns into a superheroine and foils her captors with exploding cigars. (Helpful WDW Hint #6--Use the MyDisney app to make reservations, otherwise you will be waiting forever to get into a novelty restaurant which can be an experience in itself.)

After lunch, we watched a live show of Star Wars characters basically standing around and striking poses with the occasional light-saber duel (consisting of a few passes) and a couple of explosions. CP30 and R2D2 were the only ones with life and personality. Ironic since they are droids.

Another too-long line for a mediocre ride--Alien Swirling Saucers which is the Mad Hatter's Tea Party in alien drag. Then a second time on Smugglers' Run with the Single Rider. This time I was promoted to Gunner and got to push more buttons. My crew mates were a family of three and two other singles. The dad who piloted crashed us into everything in sight include the cargo train we were supposed to be hijacking.

We wrapped up our third Disney World day with Muppet Vision in 3-D and a second ride on Star Tours (Yoda appeared to us instead of Princess Leia and there some other variations from the first time such as landing on Venus and encountering bounty hunters.) The Muppet 3-D film was probably the same as 20 years ago, but I had forgotten most of it so it seemed fresh and funny to me with a live Sweetums changing into the audience, Miss Piggy singing and dancing, and 3-D butterflies flying over head.

After buying some ornaments in the year-round Christmas shop, we headed back to the hotel where we had a cheap dinner in their bistro and watched the Weather Channel. We only had one day left on our four-day Disney World ticket, so It was decided to get up early the next day and try for Rise of the Resistance again. 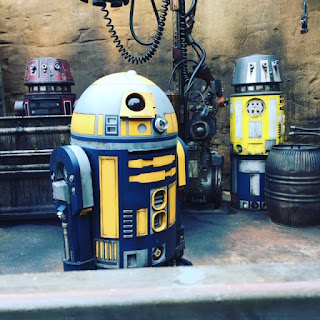 Posted by david.sheward at 7:07 AM