The state of Florida could become the epicenter of coronavirus cases soon. Heedless spring breakers have been congregating on beaches and at bars ("I'm young, nuthin' gonna stop me from partyin', bro"), the governor refused to close them down, and thousands flocked to Disney World just before it closed. A 34-year-old man visited Disney World a few weeks after I did, went home to California, started showing symptoms, was diagnosed with coronavirus and then died. I worry that even this horror show will not be enough to keep MAGA morons from re-electing Trump. Even though it's clear he has been minimizing the crisis, deeming it a Democratic hoax, and he eliminated the pandemic response office set up by Obama, some people will say, "Oh look--a check for $1,000. Sure I'll vote for Trump again. Cough, cough."

I'm very lucky I got to go to Florida when I did during the Presidents Day week vacation. With all of that in mind, let's continue with my chronicle of the Sunshine State trip with my brother Jonathan and my husband Jerry. We finished up at Animal Kingdom on Wednesday night.


Our last day in Orlando (Thurs.) was mild compared to the frenzy of hopping between five different theme parks. We decided to take it easy and have a slow lunch in Disney Springs before Jonathan had to go to the airport and I was to drive to Miami to join my husband Jerry and stay with relatives of his. It was overcast and drizzling when we checked out of the Marriott Courtyard and drove to Disney Springs, a shopping complex with a movie theater and arena for Cirque du Soleil. We had lunch at a bowling alley-themed restaurant and then walked among the shops. There was a hot-air balloon and cars that doubled as boats for rides, but we didn't have time for that. I did buy some-last minute merch including Christmas ornaments, a T-shirt with Walt Disney World 2020 on it, and postcards. Have you noticed nobody sends postcards anymore? Maybe because social media allows us to send shallow greetings and tacky pictures to loved ones immediately rather than a few days later. Lately, I've been buying Christmas decorations to remind me of trips, hopefully there will be more in the future. But maybe not for a while. 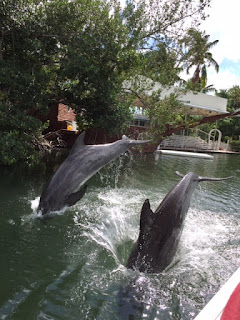 We went back to the hotel, picked up our bags and then I drove Jonathan to the airport. I then drove all the way to Miami--about two and a half hours, guided by my phone. The next day Jerry and I drove down to the Florida Keys. This was a fascinating sojourn. As we headed further south, it felt like we were leaving metropolitan civilization and entering a more isolated, different country. In places you could see the Atlantic Ocean on one side of the single-lane road and the Gulf of Mexico on the other. We went through Key Largo--it looks nothing like the movie--and stopped in Islamador because a website listed some museums and attractions.

A quaint little place called Theater of the Sea seemed like a fun way to kill an afternoon. After Sea World it was sort of rinky-dink, but amusing. There was a boat ride advertised, but that turned out to be a ten-minute jaunt with passengers squeezed onto a little glass-bottomed vessel with two dolphins leaping beside us. This was followed by the Fish and Reptile Show, the Parrot Holding Opportunity at the Parrot Theater, Dolphin Show, and the Sea Lion Show. In between shows, there was a tiny cove where you could wade among brilliant blue parrotfish. The reptiles in Fish and Reptile Show were giant sea turtles and crocodiles, one of whom lost a tooth while being fed. I won the tooth when I correctly repeated some information the guide had told us earlier, I think it was telling the difference between an alligator and a crocodile. I know I should have given the tooth to one of the many kids also on the tour, but I'm not that generous or selfless. The Parrot Show was not too exciting, we left after a few minutes. The dolphin show involved the usual splashing and jumping as did the sea lion show which featured an especially hammy sea lion. After five days of non-stop super entertainment and intense thrill rides at Disney and SeaWorlds, it was sorta nice to just have a slow, small, relaxed time. We drove back to Miami, stopping at a Dunkin Donuts and listening to NPR on the rented car's radio. That night our hosts took us to a lovely Chinese restaurant. 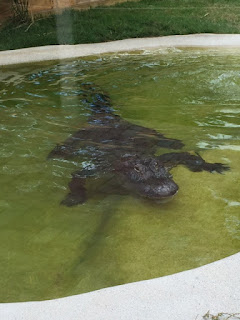 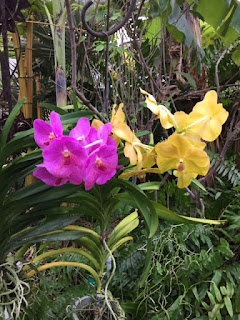 Posted by david.sheward at 9:42 PM