The Tonys, Drama Desks, Outer Critics, Lortels, Obies and all those other theatre awards have been handed out long ago. Now it's time for the Eighth Annual David Desks, the high points from the past theater season on and Off-Broadway. Unlike the Tonys, Drama Desks and OCC, I am including Sunday in the Park with George. The producers of the Sondheim revival declared the show ineligible for all theater accolades because their run was so short and they did not wish to give comp tickets to the various voters which would eat into their profit margin. Since I am the sole judge of these awards and I saw the show, I am free to include it. I have tried to limit the number of honorees in each category to six, but there are a few instances where I have stretched it to seven, just like the Emmys. The Drama Desks have also not been strict about the number of nominees in the categories. In previous years, they ballooned to as many as seven and this year, some were only five and some six. Like the DDs and OCCs, I considered Dear Evan Hansen last season for its Off-Broadway run. Among the honorees who were largely ignored by the other award dispensers are Annette O'Toole in Tracey Letts' Man from Nebraska, cast members from Hadestown, and Janet McTeer, brilliant as always in Les Liaisons Dangereuses.

Read more »
Posted by david.sheward at 7:21 AM No comments:

Scene One: The King's Private chamber, garish, tacky and gaudy. It is the dead of night, MacTrump sits up in bed, tweeting like crazy. 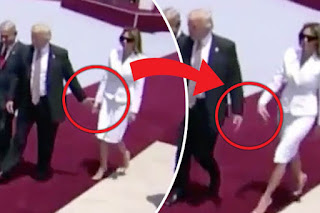 King MacTrump: They dare to mock me? Tis like spitting on the flag.
I'll fix their asses with a witty hashtag.
(Presses send)
Send!
(Tosses I-phone onto the bedstand.)
This tree-like Comey invades my thoughts like a giant ghost
The bastard is too tall by half, thinks he can hide amidst my draperies
I shall contrive to have him removed ere he can pin a scandal on my royal head
But how without appearing craven and afrighted?
For MacTrump must never appear weak, low, or unsure like mere mortals.
(Picks up his phone again and scrolls through his cabinet list)
Sessions, that Southern Keebler elf
Will provide cover for my royal self.
I'll call him on the morrow
To relieve me of my Comey-caused sorrow.
And now to bed. But first a visit to mine Queen. She owes me one.

(Exits and re-enters another bedchamber on the other side of the stage. He rouses Queen Melania, sleeping)

Read more »
Posted by david.sheward at 8:34 AM No comments:

MacTrump, A Shakespearean Farce, Act One 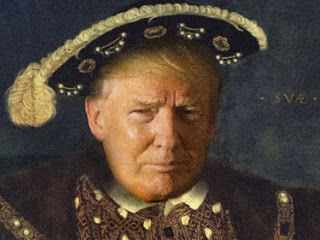 In light of the controversy surrounding Shakespeare in the Park's Julius Caesar featuring the assassination of a Trump-like would-be dictator and Trump's King Lear-ish cabinet meeting, here is a parody of the current administration employing a Shakespearean template:

Scene One: a wood somewhere in America. Enter Three Witches

1st Witch: When shall be the next meeting of we three?
On blogs, airwaves or on TV?

2nd Witch: When the hurlyburly's done
When the ratings are lost and won.

3rd Witch: There to meet upon the hump
And greet the coming of MacTrump.

Read more »
Posted by david.sheward at 12:06 PM No comments:

Broadway is headed to the beach for the 2017-18 season. Two new musicals with seaside settings, The Spongebob Musical and Escape to Margaritaville, have just announced definite dates for the fall. The Spongebob Musical, based on Spongebob Squarepants, the popular NIckelodeon cartoon series, will wash up at the Palace Theatre for previews beginning Nov. 6 before it officially docks for a Dec. 4 opening. The family-oriented musical premiered at Chicago's Oriental Theater last year and features original songs by Steven Tyler and Joe Perry of Aerosmith, Sara Bareilles (Waitress), Cyndi Lauper (Kinky Boots), John Legend, The Flaming Lips, They Might Be Giants, and T.I. with an addition song by David Bowie and additional lyrics by Jonathan Coulton. Tina Landau (Superior Donuts, Bells Are Ringing) directs. Leads from the Chicago run will repeat their performances including Ethan Slater as the titular sponge, Gavin Lee (Mary Poppins) as the sour octopus Squidward, Lilli Cooper (Spring Awakening, daughter of Tony winner Chuck Cooper) as Texas squirrel Sandy Cheeks, and Danny Skinner as dim-bulb starfish Patrick. BTW, Lauper is also set to do the score for Working Girl. a stage version of the 1988 film comedy.

Escape from Margaritaville is derived from the music of Jimmy Buffett (you know, he had that big hit with the tune about the outlawed shaker of salt), and is set for previews at the Marquis on Feb. 16 before a March 15 opening. Currently playing at the La Jolla Theatre and ready to tour New Orleans, Huston, and Chicago before its Broadway bow, the show's plot concerns a laid-back bartender at a beachside resort falling in love with a urban-oriented tourist. Christopher Ashley (Come from Away) directs. Tom Kitt (Next to Normal) is music supervisor. Kitt will also serve in the same capacity for Jagged Little Pill, a musical based on Alanis Morrisette's Grammy-winning output, which will have a reading starring Idina Menzel. The Wicked Tony winner is scheduled to star in Joshua Harmon's Skintight Off-Broadway, so she is not set to appear in Pill's planned April 2018 run at the American Repertory Theatre.

More Critical Shrinking: Rex Reed Out at the Observer

Just as Trump has pulled out of the Paris climate change accords, New York-based media is pulling out of theater coverage. As I have noted in previous blogs, print and web outlets are cutting back on stage critics or eliminating them altogether. Someone on Facebook said being a theater critic these days is like being in a long, slow version of Ten Little Indians, the Agatha Christie murder mystery where guests on an isolated island are picked off one by one. Rex Reed, the longtime film critic of the New York Observer, was recently let go after 25 years, according to IndieWire. Reed also covered theater for the publication which was bought by Jared Kushner in 2006. The president's son-in-law divested himself of the paper to take a position in the White House and sold his interest to his brother who is apparently running it into the ground (or so Reed claims). Reed's theater coverage has been sparse, mostly Broadway or Off-Broadway only if there are major names involved. The last stage production he reviewed was War Paint. His last Off-Broadway review was Yen, probably because it featured Oscar nominee Lucas Hedges (Manchester by the Sea).

Read more »
Posted by david.sheward at 6:53 AM No comments: