The coronavirus pandemic continues to restrict movement in the US and around the world. Here in NYC, the schools are closed, Broadway has shut down, and restaurants only offer take-out. Even the small Off-Broadway theaters are shuttering including the last hold-outs Len Cariou in Harry Townsend's Last Stand, The Perfect Crime, and that parody of The Office. Now the CDC is saying there shouldn't be gatherings of more than 50 people for eight weeks, taking us into the second week of May.

I had my last dining-out meal Saturday night with friends. We were the only ones in the restaurant and had a lovely time. One of the party said it reminded him of the scene in Casablanca at the La Bell Aurore where Rick, Ilsa and Sam are drinking champagne on the night before the Germans invade Paris. "This oughta take the sting outta bein' occupied," quips Sam.

It may seem frivolous, but I want to continue chronicling my recent trip to Florida with my brother Jonathan and my commentaries on the Carol Burnett Show. Disney World is now closed, but last night the Magic Kingdom was wall to wall with people for a final night. (Bad idea.) Please know that this blog is an attempt to take your mind off these scary times, and not an endorsement of ignoring the very real threat of this virus. I have fond memories of my trip, but gathering in massive numbers like those people did last night was pretty dumb.


Animal Kingdom would make our Disney World trip complete, having visited all four parks. We had toyed with the idea of getting up early and trying for one last time to get on Star Wars: Rise of the
Resistance at Hollywood Studios. But we had Fast Passes to Animal Kingdom and decided to save the Star Wars ride for another trip. Animal Kingdom is divided into several distinct lands--Africa, Asia, DinoLand USA, and the new Pandora, based on the planet in the movie Avatar. We started with the 3D show, It's Tough to Be a Bug (Fast Pass #1) which I remember seeing 20 years ago. Based on the 1998 film A Bug's Life, the show features three-dimensional insects swarming and shooting things into the audience. I made the mistake of sitting all the way on the extreme left hand side of the theater. The 3D effects did not come through very well. Next, we had a Fast Pass for Finding Nemo: The Musical, a 40-minute mini-musical version of the animated feature with puppets, clever staging and an original score by Oscar winners Robert Lopez and Kristen Anderson-Lopez (Frozen). The show was Broadway-caliber with excellent singers and actors and lots of fun. A definite cut above the usual theme-park show. Not only was there ingenious puppet manipulation, but flying and bicycling to create the illusion the characters were actual fish swimming in a fathoms-deep ocean.

For lunch at Restaurant-asaurus with its dinosaur theme, Jonathan tried the food-ordering part of the MyDisney app. It didn't really save that much time. The food was ordinary except for a scrumptious dessert called the Bee Cupcake, festooned with candied bees, a honeycomb and sweet lemony icing. Our last Fast Pass was for Expedition Everest. The waiting environment was pretty cool and detailed, recreating a Nepali explorers' station with traveler's trunks, bamboo, and prayer flags. The roller-coaster was not as scary as any of the ones at SeaWorld or Universal, but did provide a mild jolt when the tracks stopped and you went backwards while a frightening Yeti menaced you.

In DinoLand USA, we went on TriceraTop Spin (a variation on Flying Dumbo and Aladdin's Magic Carpets) and Dinosaur, a tamer version of Universal's Jurassic Park ride which still featured Phylicia Rashad in the filmed intro. I wondered aloud to Jonathan if she was still receiving royalties.

Before Kilimanjaro Safari, we squeezed in another show, The Festival of the Lion King, a 20-minute tab version of the hit Broadway musical and film with four main singing performers, acrobats, aerial dancers and puppets. Not as wonderful and fully-fleshed out as Finding Nemo, but enjoyable. There was no plot, just a bunch of musical numbers from the show. Then we did the safari, a pleasant ride in a range rover, spotting lots of wildlife including giraffes, lions, zebras, hippos. It reminded me of being in Africa in 2008 and 2012 and the numerous safaris we took in South Africa and Namibia, just as Expedition Everest reminded me of being in Nepal. Animal Kingdom is a Disney/Hollywood version of these rough, real places, just without the poverty and human misery.

There was still some time before the park closed and we went to It's Tough to Be a Bug for the second time for a better view of the 3-D effects. The most popular ride was Avator Flight of Passage in which you are seemingly become one of the aliens like in the movie and ride one of their giant flying creatures. We had a dinner reservation at one of the restaurants in the Animal 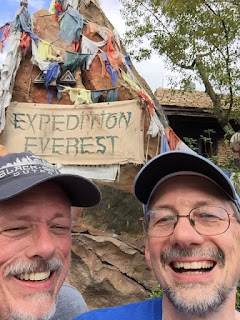 Kingdom resorts and it would mean cutting it close if the line were too long. It turned out we had just enough time though the wait was about 45 minutes. We were in line as the park closed so we did get on. It was a spectacular simulation, so it kind of made up for missing the Star Wars ride. Dinner at Jiko--The Cooking Place was wildly expensive but meaty and flavorful. It also afforded us a look at the resort so we got a sense of what it might be like to stay there. Perhaps some day after all this is over, I will find out. This was a delightful cap to our Orlando trip. Jonathan would be flying home the next day and I would be driving to Miami. 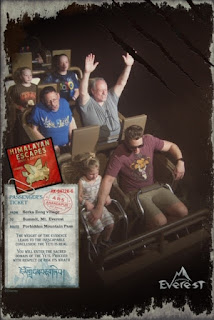 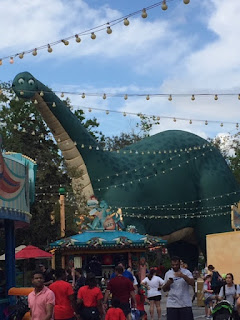 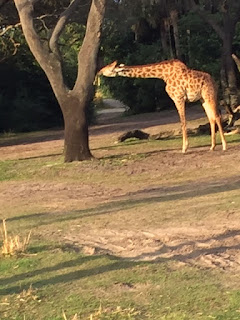 Posted by david.sheward at 3:18 PM