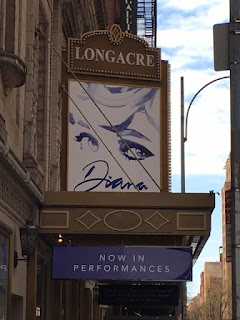 The COVID-19 pandemic appears to be waning with vaccinations increasing, but we're still not out of the woods. Variant strains of the virus are on the rise and Republican governors are dropping mask mandates and restrictions too quickly. This could mean more infections and deaths. In any case, the re-opening of Broadway is still a long way off with fall 2021 as the earliest possible date. Hamilton had announced July 4 as a target re-opening, but that appears unlikely. While movie theaters are re-opening at reduced capacity, Broadway producers have stated they cannot make a profit with less than full houses. (On the other hand, London theaters can play with reduced seating and still get by because of lower expenses.) We will have the non-profit Shakespeare in the Park with one production this summer and a few shows including MJ, the Michael Jackson musical, Lackawanna Blues, Caroline or Change and Trouble in Mind have previously announced vague fall opening dates.
But the musical Diana has just become the first Broadway production to set a specific opening date for 2021. The musical about the troubled late Princess of Wales was to have opened on March 31, 2020 at the Longacre, but all the theaters were shut down on March 12 because of the pandemic. The production was captured on film in an empty theater and the results will now be shown on Netflix starting Oct. 1 in advances of its live opening on Dec. 16 with previews commencing Dec. 1. This is the first time a complete Broadway show will be available to the viewing public before it debuts on stage. The question is will audiences be willing to pluck down the big bucks for a property already available to stream into their living rooms? The show's producers are banking on the Netflix airing to drum up interest in Diana. The Netflix series The Crown and Oprah Winfrey's ratings-shattering interview with Diana's son Prince Harry and his wife Meghan should also contribute to the box office buzz. The book and lyrics are by Joe DiPietro and music and lyrics are by David Bryan. They previously collaborated on Memphis and won Tonys for their efforts.
Read more »
Posted by david.sheward at 8:50 AM No comments: