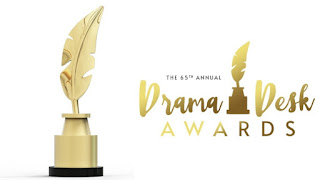 Normally at this time of year, I would be making Tony and Drama Desk Award predictions. But the Tonys have been indefinitely postponed due to the Coronavirus pandemic and the subsequent shuttering of all 41 Broadway theaters. In all likelihood, Broadway's top honor will not return until 2021 since the Main Stem will probably not be open again until next year at the earliest. If so, they might expand the eligibility window to combine the truncated 2019-20 season with whatever opens next spring. Voters will no doubt be invited back to returning shows such as West Side Story, Girl from the North Country, Moulin Rouge and Tina: The Tina Turner Musical. Shows that have closed such as The Inheritance and Grand Horizons will be out of luck, because they will have to rely on the memories of the voters who saw them. Closed productions are usually shut out of the Tonys even in "normal" times.

Play:
Prediction: The Inheritance
Preference: Heroes of the Fourth Turning
The DD includes both Broadway and Off-Broadway in all of its multiple categories, but they usually go for the Broadway choice. With the shortened season, four of the five nominees in this category are Off-Broadway, but the voters will probably go for the only Broadway entry, The Inheritance, Matthew Lopez's two-part saga of the post-AIDS gay community loosely based on E.M. Forster's classic novel Howard's End. I voted for Heroes of the Fourth Turning, Will Arbery's drama of a reunion of graduates from a conservative Christian university in Wyoming, which had a short run at Playwrights Horizons and won the New York Drama Critics Circle Award for Best Play.

Read more »
Posted by david.sheward at 1:11 PM No comments:

CBS is breaking my heart as we enter the ninth week of lockdown (NYC is still in quarantine while the rest of the country rushes back to the beaches, malls and nail salons.) The Eye network had announced the 32nd season of The Amazing Race--my favorite TV show as you can tell from past recap-blogs--would premiere on this Wed. May 20. When I tried to DVR it, the listing was absent. It turns out they are pushing back the whole series until sometime later in the year because the network is saving a strong ratings performer like TAR for the fall or winter just in case there are no new shows in production because of the coronavirus.

CBS is also not running the Tony Awards. That's not their fault. The Broadway League and the
American Theater Wing have opted not to present the awards at all because of the pandemic, unlike the Drama Desks, Outer Critics, Obies, Lortels, New York Drama Critics Circle, and Drama League which are going forward to honor the truncated 2019-20 season on various virtual and TV platforms. So I don't blame CBS, but they could have come up with a better substitute than a sing-along broadcast of the movie version of Grease. Why not a clip show of highlights from previous Tonycasts? I suggested the idea on Twitter and Facebook and the response was a resounding yes. Here are my suggestions and those of some Twitter and FB friends on what we would have included for ALL the previous nationally televised Tony shows. OK, the show would probably run for five hours if everything here were shown, but this is just a fantasy. Note: I tried not to go for the obvious every year and didn't always pick whatever show won Best Musical. Some years, they didn't even include numbers from the nominated shows.

1968--Before the Parade Passes By from Hello, Dolly--Pearl Bailey

1971---(25 years of Tony-winning musicals) Shall We Dance? from The King and I--Yul Brynner, Patricia Morrison; Before the Parade Passes By from Hello, Dolly--Carol Channing; If I Were a Rich Man from Fiddler on the Roof--Zero Mostel

1972--You Can Dance With Any Girl At All from No, No, Nanette--Helen Gallagher, Bobby Van

1975--The Story of Lucy and Jessie from Follies--Alexis Smith; Everything's Coming Up Roses from Gypsy--Angela Lansbury

Read more »
Posted by david.sheward at 9:16 AM No comments:

More news on the Carol Burnett Show front as we enter week 8 of lockdown. For my birthday, my 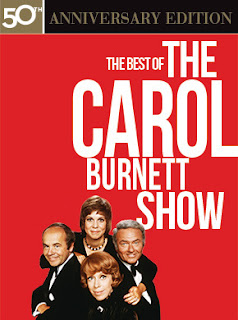 husband Jerry got me the 50th Anniversary Best of DVD collection which includes several episodes not on the Lost Episodes collection he got me for Christmas. The 50th Anniversary set was released in 2017, a half-century after Carol's debut in 1967 and includes segments from the entire series. So there are several from seasons 6-11 which have been in syndication for years as well as earlier ones not seen in their entirety since the original broadcast. In addition, the Shout! Factory website has announced they will be making available the entire 11-year run, launching with a marathon run of episodes on May 30-31. The press release states several of the episodes have not been available for decades and that Carol went over all the masters of the shows with Shout! Factory which would indicate that they would be showing complete episodes, not the hacked-up, edited half-hours MeTV and Amazon had been offering. One of the major issues seems to be the copyrighted musical material and that it has always been too expensive to include all the musical numbers. (Even some of the segments in the DVD collections are not the whole shows because some musical stuff is missing.) We'll find out in June if it will be possible to FINALLY watch the entire, unedited series. Here is a rundown of segments offered on my newly-acquired DVD collection and those on Amazon and MeTV. This blog salutes various character actors and performers such as Pat Carroll, Jane Connell, Alice Ghostley, Ronnie Schell, and Rich Little who were staples of TV during the 60s, 70s and into the 80s and 90s.

Season Two
Sept. 23, 1968: Jim Nabors, Alice Ghostley
Jim Nabors returns for the first episode of the second season. In the butchered MeTV/Amazon
version, Jim and Carol are near-sighted strangers who refuse to wear their glasses on an almost-literal blind date. Good physical comedy with the two crashing into walls and missing each other as they attempt to snuggle. Alice Ghostley who is best remembered as Esmeralda, the clumsy magical nursemaid on Bewitched and the senile Bernice on Designing Women, appears as Roger's disapproving sister Mimi in the Carol and Sis sketch. Mimi would later be played by Kay Medford and Pat Carroll in similar bits. Those are the only two sketches we see. Isabel Sanford shows up in a maid's uniform during the goodbyes.

Read more »
Posted by david.sheward at 11:06 AM No comments: