Epcot is most educational, relaxing of the four Disney Parks. The rides are more about learning than screaming. Actually none of the rides at Disney made me scream, only the ones at Great Adventure, Universal and Sea World have done that. But at Epcot, you can look into science and technology and then stroll around the World Showcase visiting pavilions of different countries. Very restful. But this was Presidents' Day Week with huge mobs roaming around, getting in your way with their strollers and taking selfies.

My cold was much better on this second day of my Florida vacation (Sun. Feb. 16) with my brother and we had our three Fast Passes for Epcot. The first was Journey Into Imagination. The Fast Pass line was short except we did get stuck behind three people with mobility issues in scooters. Fortunately, they didn't hold us up too much (how dare they!). The ride was a simplistic journey through the five senses led by the animated magical dragon Figment and Monty Python's Eric Idle as a no-nonsense scientist. Child-like and mildly amusing. We had time to kill before our next Fast Pass (Mission: Space), so we took in the Disney/Pixar Short Film festival in 3-D since the theater was right next to the Imagination complex. It was a program of three shorts, two of which I had previously seen--Get a Horse featuring vintage Mickey and Minnie, and Feast, an Oscar-winning short about a dog and his master. The third was a cute piece called Piper about a baby sandpiper.

Read more »
Posted by david.sheward at 2:45 PM No comments:

Florida Trip Day One: Back to the Magic Kingdom (Part Two)

After Epcot on our first day at Disney on Sat. Feb. 15, we took a boat--or was it the monorail?--back to the Magic Kingdom. I was holding myself together since I still had something of a cold, but I managed to hold on until the park closed late that night at 11PM. We arrived at the Magic Kingdom just as the fireworks were going off at around 8PM when the park usually closes. Main Street was crowded with people holding up their I-phones and blocking our view. About 15 minutes into the display it occurred to me we could get on the more popular rides now. This leads us to Helpful WDW Hint #3--Try for as many rides as possible during the fireworks because everyone will be watching them instead of standing in lines. The nearest popular ride was the People Mover in Tomorrowland, so I started running there and my brother Jonathan followed. Sure enough, there was not much of line and we got right on. Too bad it was not much of ride either. Basically, it was a tour of the attractions in Tomorrowland.

Read more »
Posted by david.sheward at 8:42 PM No comments:

Florida Trip Day One: A Cold at the Magic Kingdom (Part One)

My brother Jonathan and I had such a great time at Universal Studios last year during the Martin Luther King weekend, I suggested we go to Disney World this year over the Presidents' Day week-long break. I hadn't been there in almost 20 years (I recall making jokes about going down there to help to count hanging chads in the disputed 2000 presidential election) and there have been so many changes and new rides since then. Great idea, but I soon discovered the big difference between
Disney and Universal is with the former you need to do a lot more planning than the latter. With Universal, Jonathan got a special deal since we would be staying at one of their resorts. We could get an Express Pass on all of their rides. With Disney, you can only get a Fast Pass for three attractions per day. In addition, reservations are required for almost all of the nicer table-service restaurants. This required downloading the MyDisney app, buying a Magic Band for quicker access, and strategic planning worthy of a military campaign to avoid endless waiting in lines.

After months of conferring and scheduling, the big day of the trip finally arrived and, of course, I had caught a cold. I was sniffling and sneezing on the plane to Orlando, but determined not to let it interfere with my having childish fun. Loaded up on DayQuil and Cold-Eze, I managed to get my ass out of the hotel bed and in my rental car at a decent hour. I had checked undercover tourist.com which as a crowd calendar for the best days to visit each of the four WDW parks. We also bought park-hopper tickets so we could go from one location to another depending on the crowd size. Since it was a school holiday, the mobs were massive, but we picked days for each park that were the least jam-packed. Monday was designated Magic Kingdom Day with the possibility of transferring to Epcot since the two are connected by monorail.

Read more »
Posted by david.sheward at 7:52 PM No comments:

Broadway Update: Nathan Lane and Laurie Metcalf to Star in 'Death of a Salesman'


Two of the biggest names on Broadway will headline one of the greatest plays of the 20th century. Nathan Lane and Laurie Metcalf are slated to star in the sixth Broadway production of Arthur Miller's Death of a Salesman. The announcement is not official, but Lane confirmed to the Hollywood Reporter that Salesman would be opening sometime during the spring of 2021. It will be staged by Joe Mantello who is currently directing Metcalf in another American classic, Who's Afraid of Virginia Woolf? Willy Loman. the desperate drummer of the title, has been played on the Main Stem previously by Lee J. Cobb, George C. Scott, Dustin Hoffman, Brian Dennehy, and Philip Seymour Hoffman. Lane is mostly known for his comic roles in such shows as The Producers, The Front Page, and A Funny Thing Happened on the Way to the Forum. But this will not be the first time he's played a tragic salesman. He starred as the illusion-shattering Hickey in O'Neill's The Iceman Cometh at Chicago's Goodman Theater and BAM.

Read more »
Posted by david.sheward at 2:24 PM No comments: 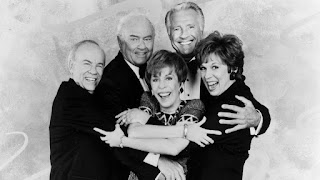 More reviews and commentary on Lost Episodes of the Carol Burnett Show found on my Christmas present--The Carol Burnett Show Lost Episodes Ultimate Collection. As noted in previous blogs, MeTV has moved beyond seasons 1-5 (the seasons no one has seen in over 40 years) and is now broadcasting seasons 6-11 (which we've all seen 100 times in syndication). There is no way of knowing if they will go back to the beginning once all those episodes are used up. How will I ever see the episodes I missed which are not on DVD anywhere? There is another DVD collection called The Best of the Carol Burnett Show featuring several segments from the early years, which I intend to purchase later but there are so many other episodes I can't find. Anyway, here are my thoughts on the segments spread across the three DVD collections in the Lost Episodes Ultimate Collection (The Lost Episodes, Treasures from the Vault and Classic Carol. BTW, Carol's Lost Christmas which contains three yuletide hours was not included in this set, though I have seen it as part of the package on some sites. I will have to buy that one separately through Amazon or eBay.)


Season One:
Jan. 8, 1968
Lana Turner, Frank Gorshin
This one was probably included in the DVD collection because the guest star was Lana Turner, a glamorpuss from Hollywood’s Golden Age and a veteran of such soapy classics as Peyton Place and The Bad and the Beautiful. The only problem was she really couldn’t act, sing, or dance. She looked gorgeous in a blonde movie-star kind of way. There are weak hijinks with Carol and Lana acting jealous over Lyle and Turner featured in a romantic waltz where she sing-speaks syrupy lyrics to "Greensleeves" and competently waltzes with lead dancer Don Creighton. Frank Gorshin displays his mimicking skills in a number with the girl dancers, each dressed as a different movie legend with Gorshin imitating their male co-stars. He really isn't a great singer either, but his impressions are spot-on including a very rare imitation of Joseph Cotten. Gorshin was a big deal to me as a kid because he played the Riddler on Batman. Now as an adult, I realize he was doing Kirk Douglas the whole time. Gorshin appeared with other impressionists such as Rich Little, Marilyn Michaels, and George Kirby on a short-lived variety series called The Kopykats. The material was pretty lame, but the imitations were brilliant. Perhaps I'll do a blog on that show under the heading of Lost TV.

The direction is pretty poor during a sketch called The Sound of Murder with Frank and Lana as a pair of crooks scheming to murder Carol. The stars appear underrehearsed and the camera angles focus on the wrong spots, missing the punchlines. The whole show wraps up with a bizarre aquatic extravaganza to "By the Beautiful Sea" with Frank, Carol, and the chorus in scuba gear and flippers.

Read more »
Posted by david.sheward at 2:46 PM No comments: