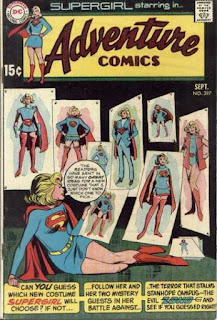 For my birthday, I went to Time Machine and purchased another cache of comics. Going there makes me think of a secret club for cool kids. You have to ring a bell and climb a flight of stairs to get to it. I conferred with other collectors on the quality of vintage books including the placement of staples and cut-out panels which ruin the value. I'm nearing completing my Supergirl in Adventure Comics run, finding #397 and #415 from the late 19602-early 1970s. In #415 the Maid of Might is choosing a new costume based on readers' suggestions. Perhaps that would make a good Project Runway episode.

Speaking of which, I met Chris March, of PR and Mad Fashion at the Drama Desk nominee event yesterday at the Essex House. His Butt-Cracker Suite is nominated for Unique Theatrical Event and Costume Design. We chatted briefly and agreed Michelle was the correct winner of this season. He also said he couldn't imagine going through what Stanley did, having to sew so many dresses at the last minute backstage at the Fashion Week show. He said if that happened to him, he'd have been crying in a corner.

Posted by david.sheward at 7:29 AM