Channel 21's reruns of Carol's show has included several of the episodes starring Dame Maggie Smith. Now best known as the dragon-like Dowager Countess of Downton Abbey and the stern magical schoolmistress of the Harry Potter films, Smith began her career in musical comedy, at least in NY. Her Broadway debut was in the revue New Faces of 1956. After several triumphs in London and an Oscar for The Prime of Miss Jean Brodie, she returned 20 years later to star in Noel Coward's Private Lives in 1974-5.

When Private Lives was in LA before opening on Broadway, she also guest-starred on Carol's show. I hadn't realized Dame Maggie had appeared with Carol a total of three times and seemed to be enjoying a vacation from Shakespeare and the classics to be clowning around, singing and dancing. She won her second Oscar for a comic role in California Suite (1979). Other Oscar-winning actresses making Carol guest shots during this period included Joanne Woodward (The Three Faces of Eve, 1957), Shirley MacLaine (Terms of Endearment, 1984), Rita Moreno (West Side Story, 1961), and Cher (Moonstruck, 1987). Woodward rarely made TV variety appearances while MacLaine did her own specials but did not appear as a guest on variety series. Moreno was a fixture on TV, especially on the children's series The Electric Company. Cher, of course was headlining her own series at this point and had appeared together with Sonny Bono on Carol's show during the first season. In honor of the recent Oscars, here's a look at award-winning ladies on Carol's show:
Season Eight
Nov. 23, 1974: Tim Conway, Maggie Smith
Maggie's first appearance on Carol's show starts with a delightful duet between the two stars "You're So London" with each praising the other's nationality and style, dressed in chocolate pantsuits with spangles. Carol sang this number with another Englishwoman, Julie Andrews, on their Carnegie Hall Special in 1961 which cemented Carol's star status while she was on the Garry Moore Show. The song was co-written by Mike Nichols and Ken Welch who later wrote special musical material for Carol's show with his wife Mitzi. The lyrics were updated to include references to Gloria Steinem and Margaret Mead (to rhyme with English tweed). Maggie then appears in a sketch as a famous actress visiting old college chum Carol and her husband Harvey, both of whom assume that because Maggie is a movie star, she must be a drug-addicted sex fiend ("We read Valley of the Dolls! Twice!"). There are actual allusions to smoking marijuana. Of course, Maggie has no such problems, but she acts as if she does to shut the pair up. (Maggie: "I won't burden you with the whole sordid story" Carol: "Burden us! Burden us!")
This is also one of Tim's many appearances before signing on as a regular. He plays the grown-up lion in a parody of Born Free and a soldier going stir crazy with Harvey. Vicki, Harvey and Dick Patterson have a funny bit about police detectives grilling a suspect who uses the Goldilocks and the 3 Bears story as an alibi. The finale is Carol's charwoman in a fantasy sequence as the star of a Ziegfeld-like revue.
Season Nine:
Sept. 17, 1975: Cher 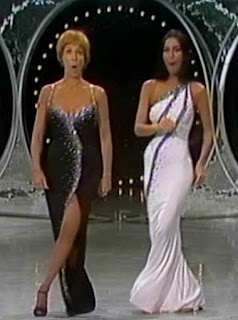 Posted by david.sheward at 4:16 AM