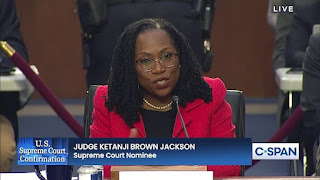 The forces of darkness are getting stronger in the US and around the world. It seemed we had a glimmer of hope when Biden defeated Trump, but our joys of liberal sanity have been short-lived. No sooner does the COVID crisis wane than Putin decides to invade Ukraine, sending gas prices through the roof. Even though Trump has been kissing Vlad's ass and would have done absolutely nothing to stop his boyfriend if he had been re-elected, MAGA nutbags will blame Biden for the inflation and price increases. States are passing laws banning books, forbidding teaching history with accuracy, and silencing gay families in the early grades. The latter complaint stems from the "Don't Say Gay" Bill in Florida which claims to protect elementary school children from the horrors of acknowledging the existence of gay and trans people. Governor DeSantis is confusing sex education and gender identity with gay visibility. He and his right-wing base don't want to admit there is nothing wrong with being gay. What happens if a gay teacher casually says "My partner and I went to the movies this weekend?" or if a student with gay parents brings up his or her family? Can the teacher of this class be sued by the outraged parents of "straight, normal" students? Previous generations of gay people were stereotyped as single, sex-crazed, 24-hour party people. Now we have families and kids and we're in commercials and on game shows. We're like everybody else. That's what frightens these people.

The recent SCOTUS confirmation hearings of Ketanji Brown Jackson are another indicator of the deep polarization of our politics. Republicans who voted for her a year ago for a lower court appointment now villify her and smear her just to score points with the base. Their reasoning seems to be "The Dems treated Kavanaugh badly, so we have to do the same to their nominee."

I fear the dissatisfaction with inflation will spur a Republican takeover of the House and possibly the Senate this November. Then Biden will not able to get anything done. In 2024, I pray the disenchantment with Trump will be enough to keep him out of the race, but he could still secure the Republican nomination despite his two impeachments and incitement to overturn a legitimate transfer of power. Biden will then be 82 and if it's a Biden-Trump rematch the outcome is far from certain.

Posted by david.sheward at 9:04 AM