B'way Update: Dana and Room To Play in Rep, Etc. 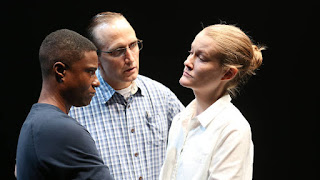 The new post-shutdown Broadway season just got really interesting. In an unexpected and startlingly different move, two highly-praised, but bizarre Off-Broadway plays will transfer to Broadway to be performed in repertory. Tina Satter's Is This A Room and Lucas Hnath's Dana H. will alternate performances at the Lyceum Theater with the former beginning previews on Sept. 24 and opening Oct. 11 and the latter commencing previews on Oct. 1 and

opening Oct. 17. The dual-show engagement will play until Jan. 16, 2022. Both plays were presented at Vineyard Theater as part of the foreshortened 2019-20 season.

Each presentation is unique and not your typical Broadway fare. Is This A Room, directed and conceived by Satter, concerns the real-life Reality Winner (her actual name), an Air Force linguist who was imprisoned for leaking information that the Russians interfered in our 2016 Presidential election. The entire 70-minute play is composed of transcripts from her FBI interrogation and the search of her home. Emily Davis repeats her stunning performance as Reality. She won an Obie and was nominated for a Drama Desk Award and the production won a Drama Desk Award for Unique Theatrical Experience.

Dana H. is also based on actual events and transcripts. The playwright's mother Dana was abducted and held captive in a series of Florida motels for five months. Deirdre O'Connell lip-synchs to recordings of an interview conducted with the real-life Dana and directed by Obie winner Les Waters. The production was interrupted by the COVID shut-down and O'Connell won the Obie, Drama Desk, Outer Critics Circle and New York Drama Critics Circle awards.

Vineyard Theater also announced its 2021-22 Off-Broadway season. Charley Evon Simpson's sandblasted (Feb. 3--March 13, 2022) follows Angela and Odessa as they encounter wellness guru Adah on a journey of self-discovery. David Cale's Sandra (Spring 2022) is a solo play about a woman investigating the disappearance of her friend in Mexico. Lessons in Survival, Part 2 (Spring 2022) is described as an exploration of a famous 1971 conversation between authors James Baldwin and Nikki Giovanni.

In other news, Harry Potter and the Cursed Child has pushed up its opening at date to Nov. 12 from Nov. 16 at the Lyric.