Encounters with Mike Nichols: A Book Review and Memories 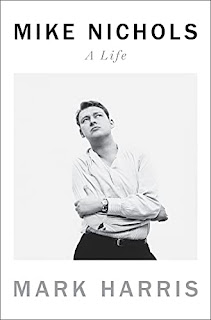 Mark Harris' comprehensive biography of wonder boy director Mike Nichols is over 600 pages but reads like a shot. There are literally hundreds of top-name show-biz figures interviewed and quoted directly, giving a multi-faceted, complete picture of the subject's diversified career. (It is weird to read quotes from Scott Rudin, the now disgraced producer who has withdrawn from an active role in all of his productions due to his toxic behavior). Nichols was one of the few directors to achieve prominence in film, theater and TV, winning the top awards in all three plus a Grammy for his comedy recordings with Elaine May.

My earliest memories of Nichols were listening to those LPs with May. Their hilarious sketches recreated the push-pull war between the sexes as well as commented on contemporary foibles of society with satire by turns gentle and barbed. I used to do imitations of the pair at post-performance parties for the community theaters in which I acted. The one time I encountered May in person was at an awards event where her partner the legendary movie director Stanley Donen was a presenter. I told her I loved her and Nichols' routines and would do them at the drop of a hat. She said "Do one now." So I did the first few minutes of the Telephone sketch. She said, "It's amazing that you remember all that." I now wish I had done the Mother and Son sketch ("Hello, Arthur, this is your mother. Do you remember me?")

The Nichols and May act led them to nightclubs, TV appearances and ultimately a run on Broadway. Once their routines had run its course, the duo attempted to go to the next level. Nichols starred in a comedy written and directed by May, but it closed out of town before reaching New York. Nichols was dismayed his character (based on him) was a neurotic mess. The play later resurfaced as Taller Than a Dwarf, rewritten by  May and directed by Alan Arkin. It starred Matthew Broderick and Parker Posey, was sort of funny and had a brief run on Broadway. (May's life and career fascinate me as much as Nichols'. It has just been announced she will be the recipient of a honorary Oscar in 2022. I will try to do a blog on her soon.)

After the failure of her play, Nichols broke with May for a while and they eventually reteamed on movies like The Birdcage and Primary Colors and occasional brief comedy appearances at benefits and inaugurations. After the comedy act broke up, Nicholas was at a loose end as to what to do until he got the chance to direct Neil Simon's Barefoot in the Park which became a smash hit.

Harris captures the great regard actors had for Nichols as well as his compulsions and neuroses. Despite his tremendous success, he was never entirely secure. Oscars and Tonys and box office bonanzas for Who's Afraid of Virginia Woolf?, The Graduate, Carnal Knowledge, The Real Thing and Annie, were followed by flops like The Day of the Dolphin, The Fortune, Wolf and What Planet Are You From?

(Side note: There was even a joke about Dolphin on The Carol Burnett Show. Carol plays a woman insanely jealous of her former high school classmate Vicki who is now starring in a movie directed by Nichols. Carol tries to downplay Nichols' status as a top moviemaker: "Oh, please, even I could put a grey wig on Elizabeth Taylor and have a hit. I hear he's reduced to working with dolphins.")

Dolphin starred George C. Scott, the subject of a biography I wrote, published in 2008 (Rage and Glory: The Volatile Life and Career of George C. Scott). It's a thrill to see my book cited in the bibliography and massive notes for Harris' tome. Scott was directed by Nichols in a revival of Lillian Hellman's The Little Foxes, Simon's Plaza Suite, and an all-star production of Chekhov's Uncle Vanya. Scott was a dazzling actor, but an abusive alcoholic and he behaved erratically on all of Nichols' productions, frequently missing performances and rehearsals to go on binges. The final straw came during Vanya when Scott made a cruel joke about Nichols' wig. (As a child, Nichols suffered from a rare disease which caused him to permanently lose all of his hair.) They never worked together again.

I encountered Nichols when I was an usher, worked the concession stand, and briefly assisted in house management for the entire Off-Broadway run of David Rabe's Hurlyburly at the Promenade in 1984. He did not deal directly with me but the one time I assisted in gauging when the house was full so the manager could dim the lights and start the show, he was friendly and funny. The movie-star-stuffed play about two drug-addled, misogynistic casting directors was such a hit we sold out every night and Nichols insisted no latecomers be seated until intermission. This led to some difficult moments, particularly when producer Alexander Cohen arrived after the curtain due to a rainstorm. (We finally did seat him after about 20 mins.) It was an exciting time with just about every major star at the time attending. The very first preview I seated Steve Martin and Candice Bergen (so absolutely stunningly beautiful she took my breath away). At subsequent performances, we had Paul Newman, Joanne Woodward, Warren Beatty, Meryl Streep, Tom Stoppard (who tipped me $5--quite a lot in those days-- when I poured him a Coke), Leonard Bernstein, Mikhail Baryshnikov, Gregory Hines, Sandra Bernhardt, and many others. When I sat Charlotte Rae, I told her "The Facts of Life doesn't let you show a tenth of your talent." "You are so right," she replied.

Judith Ivey brought down the house at every performance and she deservedly won a Tony when the play transferred to Broadway. Christopher Walken was never the same twice and it was a lesson in acting to watch him. The one problem with him was he had a long stretch off-stage during the second act, so every night he would go around to corner to a nearby bar for a quick shot. One night it was raining heavily and he came in soaking wet. His dresser told him, "It's not raining in the play, you can't go on like that." The dresser whipped Walken's pants off, pressed them quickly and got him properly clothed just before his entrance. Cynthia Nixon was then a teenager and graduated from high school on the afternoon of opening night. Her mom would come to the show every night to pick her up and stand with us to watch her play the final scene with William Hurt.

I last saw Nichols at a matinee performance of David Mamet's Race with his wife Diane Sawyer. Three years later, in the same theater, I would see Nichols' stunning revival of Death of a Salesman which would win him his eighth Tony Award. The production conveyed the heartbreaking ordinariness of Philip Seymour Hoffman's beaten-down Willy Loman and demonstrated the director's ability to present real life on stage in all its simplicity and complexity.