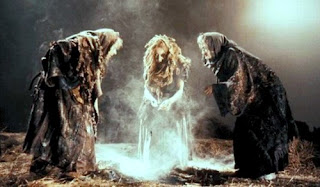 Let us continue with my Shakespearean parody of the Trump circus: (previous installments Act One, Act Two, Act Three Scene One)

The curtain rises on a gloomy cave with three forbidding figures surrounding a boiling cauldron. At first they appear to be the three reporters from Act One who were in reality the three witches. Then lightning strikes and they slowly morph into Vladimir Putin, Kim Jung Un, and the Saudi Crown Prince.

Witch 1 (Putin): Energize the brew with a cyber hack
Leave no trace of Wikileaks' track
Flavor with poisonous blaze
And ripped-out livers of despised gays


All Three: Boil, roil, toil and trouble
Fascism flame and hatred double
Orange skin and hairdo strange
Concentration camps and climate change
Illegal immigrant and unwed mother
Wage slave and soul brother
Tear America down and pit one against the other.

Witch 1: Hold, sisters, I sense the approach of our puppet lump
With questions and rage in his tiny mind, now comes MacTrump

(MacTrump enters the cave, holding his I-phone like a shield) 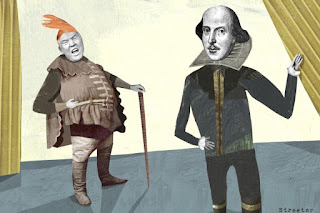 MacTrump: Weird sisters, I must know my ultimate fate
Is it scorn of history or overlord great?

Witch 2: Seek not to know what thou mayest fear.

Witch 3: And who are you to question us, your masters drear.

MacTrump: Nay, thou demons of demagoguery,
Though thou hast given me my crown and to whom I owe all
I defy thee and most needs know what the future holds.
To be thus is okay, but the House has flipped and turned Democratic
The harridan Nancy Pelosi and her flying-monkey minions
Are besetting me with subpoenas and threats of impeachment
Cohen, Flynn, Manafort, Hope Hicks, all might flip on me
Jeffrey Epstein could spill the beans about all those underage girls
Mueller is set to testify before Congress.
You must show me the future or I shall hit the nuclear button
And take this wide green world down with me in a blaze of thermonuclear fury!

Witch 3: Very well, MacTrump, we shall show you the end of thy turn
on this foul earth, but recall you asked for it!

(The three witches join hands and dance around their boiling cauldron)

Three Witches: Simmering hatred, vile stew
This is what will happen to you.

(The Squad of four progressive Congresswomen--AOC, Omar, Pressley and Tliab--jump out of the pot and with a MacTrump dummy and haul it down to defeat)

MacTrump: To be humiliated by four foreign-born broads! This will never stand.

Witch 3: Actually only one of them was born in an non-American land.

Witch 2: Shhhh! Know ye not we reject facts out of hand.
MacTrump: But what shall I do?

Witch 2: Go on Twitter, denounce these four as unAmerican
Because they dare to disagree with you, and know not their place
Tiptoe right up to the edge, but stop short of directly bringing in race

Witch 1: Have a big parade with airplanes and tanks
Force all your subjects to give thanks
For just being allowed to breath the same air as you.
For good measure throw in a distracting gaffe or two--

MacTrump: Yes, the fake news media will talk about that for days
And forgot about my conniving, criminal ways.
My gratitude is boundless and ye three shall be rewarded
As the West crumbles and your fondest wishes are afforded. (MacTrump runs out as the three demons cackle.)

Posted by david.sheward at 3:26 PM