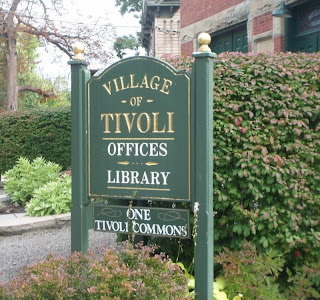 We had found Tivoli the night before, searching for someplace to eat dinner before the opera in the next town to the south in the Hudson Valley area. The performance of the rarely-performed Oresteia by Taneyev was at a college campus as part of an arts festival (here's my review), but there were no nearby restaurants. So our weekend guest who was seeing the opera with us found a number of culinary choices on his Smartphone. We drove for maybe 20 minutes on Route 9G before the turnoff to the tiny town which contained a cluster of city-style eateries including the Japanese one we finally settled on, an avant-garde theater company, and a used-book store in what looked like a broken down old house.

I wanted to come back the next day to check out the book store. It was one of the few in the area I hadn't investigated before. There were also signs that proclaimed a townwide yard sale and a book sale at the local library that day (Saturday). We dawdled and relaxed on Sat. morning before arriving in Tivioli at about 1:30. Our guests stayed at our house while my partner and I took the 40-minute drive. Indeed, lots of yards were full of antiques, magazines, video games, and furniture. But many sellers were packing up their wares. I felt like the child in that James Joyce story I had to read in high school. He longs to visit a Dublin flea market, but arrives just as it's closing up and hastily buys some piece of crap so that he can feel like he's part of something exciting.

My partner commented "You have to get there early for a lot of the good stuff." One guy had a big backyard full of items. I eagerly went for his plastic tubs full of comic books. But all the ones in the first tub had serious water damage. The covers from several Spider-Mans were ripped and the interior pages were soggy. It was as if they had been left out in the rain. They were all from the 80s and 90s anyway which is not my favorite period. I didn't buy anything.

In the bookstore, an elderly man with two hearing aides sat behind the sales desk. A woman asked him if he had any first editions of Emily Dickensen. He laughed. As I browsed, my partner called me to say he was across the street at a pizza joint having lunch. I joined him. One customer wore a T-shirt that read "Alcohol Tobacco and Firearms Is a Convenience Store, Not a Government Agency." Another whose arms were covered with tattoos had one that read "In a free society, no one should have to ask for the right to bear arms.--Thomas Jefferson" (or words to that effect).

The first one said to the other, "It seems we like people to know our opinions."

My partner Jerry read about Anthony Weiner in the Daily News as I munched on pizza. On the way out, the first man with the slogan told the second "Keep your powder dry." We finished and I saw the flyer for the library sale pinned to the screen door, but my heart sank as I read the sale only lasted til 2 PM. My watch read 2:45. Why did these people close up so early? Damn! I felt just like the kid in the Joyce story. Who know what cheap, interesting books they might have had?

I consoled myself at the bookstore across the street by buying a hardcover short-story collection, Free Agents by Max Apple, and three paperback play scripts--The Last Days of Lincoln by Mark Van Doren, Artichoke by Joanna Glass, and A Few Stout Individuals by John Guare. I had only seen the last one. I had previously found a Max Apple short story ("Bridging") in an anthology edited by Richard Ford and wanted to read more of his work. Total purchase-$7.

On the way back to the car, I passed the library, now closed. It was small and I comforted myself with the speculation that the books they had were probably crappy and water-damaged like the comics at the yard sale. It occurred to me that the library was probably low on funds and could on stay open for a short time on Saturdays. At that moment, a frail-looking old woman, maybe the librarian herself, came out of the building. As I continued walking I heard a cry and turned to see that she had fallen on the gravel. Two ladies helped her up and she protested she was fine. I was a half a block away at that point and I felt I should have gone back and helped her, too. But she was already walking in the opposite direction.
Posted by david.sheward at 9:04 PM