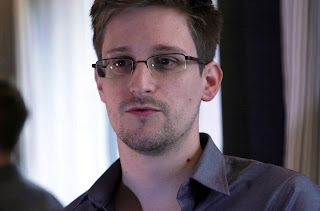 Last night I was listening to NPR on my car radio while driving upstate. After the Fabulous Beekman Boys finished talking about gooseberries, there was a news report that exiled NSA leaker Edward Snowden emerged from the gift shop at the Moscow airport to hold a press conference. He announced he was seeking temporary asylum in Russia which he called a champion of human rights. I nearly crashed into a guardrail. Obviously Mr. Snowden has been too busy browsing through vodka shot glasses and nesting dolls to hear that Vladmir Putin, the macho crime boss of Ruskieland, has passed draconian antigay laws. It is now a crime to hold a gay pride rally, espouse progay sentiments, or even wear rainbow suspenders in public. In addition, gay or progray foreigners can be detained for 14 days and then expelled from Vodkaville if they so much as do a Bette Davis imitation or start singing Lady Gaga songs. (Good thing I cancelled my St. Petersburg trip.) So much for human rights, Mr. Leaky Faucet. I supposed this hero of freedom (Snowden) doesn't consider gays eligible for equal treatment.

Joe Stalin--I mean Vlad Putin--has said Snowden can stay in Gulagtown if he doesn't harm the US. Snowden reportedly plans to go to South America at some point.

There have been calls for boycotting the upcoming Winter Olympics scheduled to be held in Sochi. I'm all for it.
Posted by david.sheward at 9:10 AM