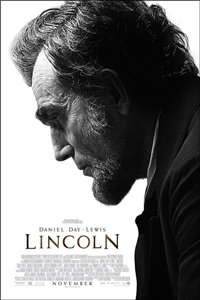 It was wonderful to see Lincoln last night at the Union Square multiplex, not only because it was a great film and will probably win a bunch of Oscars, but also because I have read so many Lincoln books over the past few years. It felt like I knew the people and the era intimately, as if I were living then, or at least had a feel for what it may have been like to live in Washington as everyone's world was turned upside down and inside out by the Civil War. Rather than attempt to encompass all of Lincoln's life or even his time in the White House (as Gore Vidal did in his novel and the TV mini-series), screenwriter Tony Kushner and director Steven Spielberg zero in on a few weeks in 1865 as Lincoln pushes the Amendment to end slavery through the House of Representatives.

My only problem was the occasional "weight-of-history" scenes which felt too much like they were imposed on the action. One example is the scene between Lincoln and Mrs. Keckley (Gloria Reuben), Mary's dressmaker and companion. "What do you see as the future of your people," Lincoln asks her. I doubt if such a conversation ever took place and it seems like a writer's invention to scream at us "Important things are happening here, you people of 2012!"

I predict it will win Best Picture and Spielberg will get his second Best Director Oscar. Kushner will probably get an Adapted Screenplay award, a making him one of the few authors to win a Pulitzer, Tony, and Oscar (I think Alfred Uhry is the only other one). Daniel Day Lewis is a lock for Best Actor and Tommy Lee Jones and Sally Field are strong contenders for supporting Oscars. Hal Holbrook had a very nice couple of scenes as power broker Preston Blair.

Another bonus for me was the strong presence of the NY theater community in the cast. There were many actors in supporting role whom I've seen and reviewed in numerous Broadway and Off-Broadway productions. I had just seen one actor (Byron Jennings) in The 27th Man at the Public just a few days earlier and another (David Strathairn) I had seen in The Heiress the previous week. Many of my favorite stage actors had prominent and featured roles incl. Elizabeth Marvel, Bill Camp, S. Epatha Merkersen, Michael Stuhlbarg, Stephen Spinella, Julie White, Dakin Matthew, Coleman Domingo, Jared Harris, Adam Driver, Boris McGiver, Stephen McKinley Henderson, Christopher Evan Welch (who was just in The Master also).

There were problems with the experience. The Union Square has those rocking chairs which lean back. The person behind me must have had extremely long legs because he kept kicking the back of my chair. It wasn't a constant barrage of violent assaults, but it was just often enough to be annoying. I did turn around once to stare at him and that worked for a while, but there were a few slight taps afterwards. My senses were bombarded from the opposite direction as well. In the row in front of me and few seats to my right, a woman was looking at her I phone, checking her Facebook status, for long intervals during the film.The light from her phone was very distracting. There were numerous admonition to turn off cell phones and not to text during the film. I think she must have thought "As long as I'm not talking or texting during the movie, I'm not bothering anyone." I really should have said something, but I didn't want to cause a scene. But it still bothers me. I mean, didn't this woman know she would be seeing a long, serious film with few battle scenes?  If you're so bored by history that you just have to look at your Iphone pictures, why even go to the movie? Next time I will gently say, "Please turn off your phone, the light and your FaceBook updates are taking me out of the 19th century, you moron."

To continue with the Lincoln saturation, I have ordered used DVDs of two TV mini-series on our 16th president: Carl Sandburg's Lincoln starring Hal Holbrook and Sada Thompson from 1974 and Gore Vidal's Lincoln with Sam Waterston and Mary Tyler Moore from 1988. I've already seen Raymond Massey in Abe Lincoln in Illinois and Henry Fonda in Young Abe Lincoln. I will blog about the differences.

Posted by david.sheward at 9:17 AM