High and Low Culture: Comics and Opera in Upstate NY

Last weekend I ran the gamut from high culture to low within 24 hours. On Saturday, we went to the high-definition screening of the operatic version of The Tempest from the Metropolitan Opera to the Time and Space Limited Theatre in Hudson, NY. Sunday, I drove to the Albany Holiday Inn to attend the Albany Comic Con (I missed this year's huge Comic Con at the Javits Center in Manhattan). I was probably the only person to have attended both events. Though the audiences did not overlap, they both were enthusiastic and part of a niche. Opera and comics do not appeal to the masses, but their supporters are devoted.

Based on Shakespeare's play, The Tempest featured fascinating staging by Robert LePage who sets this tale of the banished Prospero in La Scala, the famous Milan Opera House. You'll recall that Propsero was originally the Duke of Milan before his treacherous brother casts him out to sea. The broadcasts give you such an intimate experience of the performance. When we have gone in person, we're always way up in the second or third tier. I also love the broadcasts from the National Theatre of Great Britain, since not every show they feature is gong to make it to Broadway. It's like taking a trip to London without the expensive airfare.

Time and Space Limited is a charming little space in Hudson that features off-beat and independent films as well as art exhibitions. 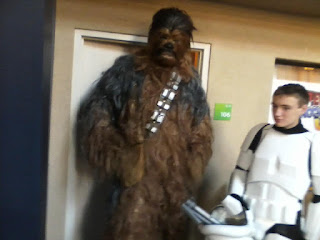 The Comic Con was just as intimate, taking place in the small Holiday Inn off the highway in Albany. I limited myself to spending only about $30. One dealer had an enormous selection of nice Silver Age stuff. We chatted a bit and he said he would email me about his next sale at his house. I asked if he had a website or was on Facebook or Twitter. He replied had none of those social media outlets since he was so busy with studying to become a nurse. He had a coverless Tales to Astonish with a nice Giant-Man and the Wasp story as well as a Steve Ditko-drawn Hulk in which the Green Goliath battles with the Humanoid creation of the big-brained Leader on a runaway railcar. Giant Man and the Wasp are an overlooked pair. They were founding members of the Avengers and were left out of the big movie version. But there are rumors the Wasp will appear in the upcoming Iron Man 3. Without Giant Man, the Wasp won't be as interesting. She was kind of a sexist stereotype of a flighty female, but her romantic byplay with Giant Man made them the Nick and Nora Charles of comics. The obnoxious and arrogant Sub-Mariner later took over their spot and they were relegated to only appearing in The Avengers. At least each of the Justice League had their own feature in DC Comics.

Here's a list of the comics I bought in Albany. Another interesting find was The Spectre #8, the penultimate in the series. The Spectre was a DC supernatural spirit who lives inside the body a tough policeman. The Spectre first appeared in the 1940s, then faded away. He came back in the late 1960s and the artists applied psychedelic colors and design popular then to depict his ghostly adventures. It was sort of a safe LSD trip for little kids.