Today normally would have been one of the best days of the year, Tony Award Day! But because of
the COVID-19 pandemic, Broadway theaters have been shut down since March 12 and are not likely to 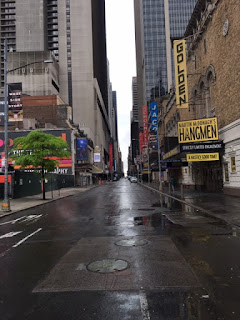 reopen until January 2021 at the earliest. In a May 25 interview with Tim Teeman of the Daily Beast, Broadway League president Charlotte St. Martin was cautiously optimistic about the Main Stem lights being relit. But she stressed social distancing and playing to half-empty housing would not fit with the Broadway economic model which requires packing in as many bodies as possible for maximum profit. A few shows such as Plaza Suite, MJ: The Michael Jackson Musical and 1776 have announced opening dates for the spring of 2021, but those may be aspirational like Trump saying he wanted packed churches on Easter.

Without a vaccine or even treatment for the coronavirus, theatergoers will probably be reluctant to return. What would Broadway look like without a vaccine? It might mean closing the entire Times Square area off from cars so that the side streets from 42nd to 50th could be used for long lines of patrons to get their temperatures checked and handed face masks as well having their bags searched. (The latter practice started just a few years ago in the wake of various terrorist threats.) Getting into the theater could become just as time-consuming as going to the airport with patrons making sure to show up two-to-three hours before curtain time.


There's also the threat to performers. Will actors have to wear face masks and maintain a separation of six feet? The British play Lungs will have the only cast members Matt Smith and Claire Foy keeping apart. Audiences will be watching (and paying) on line. But that's a two-character play. How will huge cast musicals function? Singing at full volume causes potentially virus-laden droplets to be propelled to cast mates. A church choir practice was one of the super-spreader events in the early stages of the American outbreak. The choreographer of Mrs. Doubtful recently posted she was restaging all of that show's dances with social distancing. But will that be enough?

In addition to no Tonys today, the digital versions of the Drama Desk and Obie Awards, as well as several digital Tony tribute substitute programs and theater benefits, have been postponed for an undetermined period because of the nationwide protests against racial injustice and the murder of an unarmed African-American man, George Floyd, at the hands of a white police officer. The DDs were going to be handed out on NY-1 last Sunday May 31, but the local all-news channel opted (correctly) to run ongoing coverage of the demonstrations.  Drama Desk co-presidents Charles Wright and David Barbour issued a statement in support of the protests and Black Lives Matter. The Obies were to be presented online on June 4 and their presenters came to a similar decision. It's not clear when these awards will be shown as the protests and the conditions that sparked them continue to enfold.

So with no Tonys, Drama Desks or Obies, here are my personal choices for the best of the truncated on and Off-Broadway season.

Posted by david.sheward at 2:02 PM