The Evolution of 'The Carol Burnett Show' 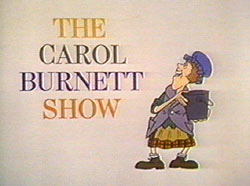 Lately my favorite YouTube subjects are clips from The Carol Burnett Show (1967-78). Someone has even posted full episodes which can be found in a DVD Collectors set. Unfortunately, the copyright to the first four or five years of the show is shared with a different company than the one distributing the DVDs, so those shows are much harder to come by. But those are the ones I especially would like to see since I was too young to stay up late and watch them when they first aired. By the time Burnett was on Saturday nights at 10 PM, my sister, brother, and I were allowed to watch the show every week. One magical season in the early 1970s the entire CBS line-up was classic-All in the Family, MASH, The Mary Tyler Moore Show, The Bob Newhart Show, and then Carol. 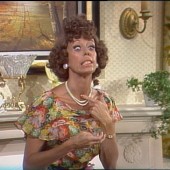 Burnett came in at the peak of TV variety shows. In the late 60s, they were a staple and major personalities displayed comedy and musical chops. She seems to be one of the few to survive as a strong memory in the public mind. The hours starring Flip Wilson, Danny Kaye, Sonny and Cher, Tony Orlando and Dawn, and Glen Campbell have largely vanished from the public consciousness.

Towards the end of her 11-year run the main material of her parody--couples fighting and movies from Hollywood's Golden Age--were seen as old-fashioned and the show's dominant place at the Emmy Awards was taken over by Saturday Night Live. But looking at the show now, I realize why I loved it. I identified with Carol. Like her, I loved playing at being in old movies and would fantasize about her impossibly handsome supporting player Lyle Waggoner.

It's also interesting to see the progression of her comedy, particularly how women are portrayed. In her early shows, she played a character named Zelda, an ugly, nasal-voiced shrew who bedeviled her poor husband George (played by Harvey Korman). The humor was based on Zelda's physical unattractiveness and George's desperation to escape her in his dreams, but she manages to invade those, too. There were also the Carol and Sis sketches where Burnett and Korman portrayed constantly bickering spouses with Vicki Lawrence as Carol's younger sister acting as a buffer or sometimes the cause of the disputes. In addition, Burnett reversed traditional sexual roles by showing a healthy, even aggressive interest in the gorgeous Waggoner who was portrayed as the male equivalent of the pretty "dumb blonde" in many scenes.

Then in the mid to late 70s, they introduced the Family sketches with Carol as the short-tempered, unrealistic Eunice, Korman as her loutish, dimwitted husband Ed, and Lawrence as her demanding Mama. It started out with guest star Roddy MacDowall as Eunice's brother Philip, a famous writer whose exploits in the glamorous world outside of Raytown are of no interest to his kin. They are locked in their petty grudges over small issues. Gradually, the sketches focused on Eunice and her frustration at small-town life and her dead-end marriage. In one sketch with guest star Joanne Woodward as Midge, a fun-loving college chum, Eunice even dared to suggest the American family itself wasn't all it was cracked up to be and Midge's single lifestyle was preferable to Eunice's domestic servitude. Here was a radically bitter and harsh portrait of American life encased in ten-minute sketch form.

Lawrence was eventually given a spin-off series as Mama with Burnett and Korman making occasional appearances, but the characters lost their hard, realistic edge in Mama's Family. Mama became a fount of crackerbarrel wisdom instead of the selfish tyrant of the Family sketches.

Dick Clair and Jeanna MacMahon who created the characters, wrote a 90-minute TV play tracing the family from 1955 to Mama's death in 1978. Material from the sketches was incorporated in the story and Eunice emerged as a working-class Blanche DuBois, tormented by her ridiculous illusion of a show-business career (she even won a spot on The Gong Show in the Burnett series and was promptly gonged after only a few bars of "Feelings." The final shot of her reacting to the rejection by the celebrity judges is devastating.)  Eunice is sort of a talent-free version of Burnett. She has all of Burnett's dreams and love of show business but none of her gifts. We're so lucky that, unlike Eunice, Burnett did get the chance to escape her confining background (alcoholic parents, impoverished home) and share her talent with us.

Posted by david.sheward at 1:27 PM