Oscar Nominees: Shorts, Flee, Ascension, plus a Side Trip to LMAD

The never-ending quest to see all the Oscar-nominated films for 2022 (or as many as possible) continues. The plethora of streaming services has made it much easier to cram as many in as possible before Oscar night on March 27, also the fact that the ceremony is later than in recent years due to the COVID crisis. In addition, it's Presidents Day week which I have off from my job. This past Thurs. night, we watched Flee and killed three birds with one stone. This film about the real-life story of a gay refugee escaping from Afghanistan and settling in Denmark, is nominated in a trio of categories: Best Animated Feature, International Film and Documentary Feature.
Then on Friday, I watched three documentary shorts on Netflix: Lead Me Home, an examination of homelessness in Seattle and San Francisco; Three Songs for Benazir, a profile of a young couple struggling to get by in devastated Afghanistan (before US troops pulled out and things got even worse); and Audible, about a deaf African-American high-school football player. Also on Friday, I found several nominated short films posted on YouTube: Affair of the Art, a funny British cartoon featuring an eccentric artist and her bizarre family of obsessives; Windshield Wiper, animated vignettes about love; On My Mind, a Swedish live-action short centering on a grieving husband desperately trying to record a karaoke version of the Elvis Presley standard for his dying wife.
Sunday night we watched Ascension on Paramount Plus. The only reason I got this service was to watch
the Tony Awards and then I was too lazy to turn it off after the one-week free trial ended. In order justify the $5 a month fee, I watched Let's Make a Deal and Fairly Oddparents reruns while I was home recovering from injuries from an auto accident (I was hit by a car right before Christmas and suffered six broken ribs and herniated discs.) During this time, I became semi-addicted to LMAD. Wayne Brady is far more talented and entertaining than Monty Hall ever was, plus several gays, lesbians, transgender people and drag queens have shown up as contestants. In addition to its CBS catalogue, Paramount does have some good documentaries about plane crashes, a subject my husband is too interested in. So the cost has been justified. 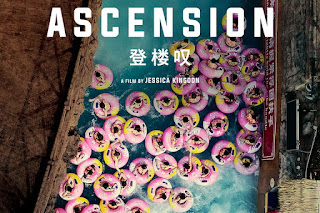 But I digress. Ascension is a documentary on workers in modern Chinese society. With no narration or commentary, the film moves from factory workers performing tedious manual labor to entrepreneurs attending seminars on Internet marketing and live streaming to potential butlers training in etiquette and table service. At first the film is boring but like a Frederick Weissman work, it gradually draws you into its own world and provides a valuable window into Chinese life. It won the Best Documentary Award at the Tribeca Film Festival, but will probably lose the Oscar to the film about the Summer of Soul concert.
After Ascension we watched the new Abraham Lincoln doc series on the History Channel which would probably be banned in schools where they want to outlaw Critical Race Theory since it discusses America's embrace of slavery.
Oscar Nominees/Buzzed Movies Seen:
West Side Story (in the actual cinema, Kaufman Astoria on a Monday afternoon, we were the only ones in the theater)
The Power of the Dog (Netflix)
The Lost Daughter (Netflix)
tick...tick..Boom! (Netflix)
Don't Look Up (Netflix)
Passing (Netflix)
Being the Ricardos (Amazon)
The Tragedy of Macbeth (Apple Plus)
CODA (Apple Plus)
Belfast (iTunes)
Nightmare Alley (HBO Max)
Dune (iTunes)
King Richard (iTunes)
Flee (Amazon)
Ascension (Paramount Plus)
Nominated Short Films
Lead Me Home (Netflix)
Three Songs for Benazir (Netflix)
Audible (Netflix)
Queen of Basketball (NY Times/YouTube)
On My Mind (The New Yorker/YouTube)
Affairs of the Art (The New Yorker/YouTube)
The Windshield Wiper (YouTube)
Posted by david.sheward at 6:01 AM