Where Are We Now?

As summer ends, most of America--myself included--thought we would be in a better place by now. Trump is no longer president and we have a sane, compassionate man in his place. The corona virus was supposed to be defeated and all kinds of great legislation should have been passed. But instead, the delta variant, climate change and the Taliban had other plans. So far only one big bill (COVID relief) has passed. After plateauing, the COVID death toll is rising. Labor Day travel and the return to classrooms threaten another spike. Never mind that one of the main causes for the pandemic resurgence is vaccine hesitancy and downright denial, mostly by Republicans. (I suspect there are more than a few non-vaxxers who are refusing to get the jab just to make Joe look bad.) Biden will get the blame anyway.Extreme weather is now commonplace with New York and New Jersey unexpectedly suffering the effects of hurricanes just like Louisiana and Florida. There are so many wildfires in the western US, they have to be named separately. Right-wingers are finally admitting climate change is real, but not that we have to stop or drastically reduce fossil fuel consumption and emissions.

Afghanistan is another fire-ball controversy. Everything was going more or less OK for Biden, but then he started pulling troops out (according to the deal Trump set up) and the Taliban took over faster than expected. The mad dash to get Americans and Afghan allies out of the country before the deadline of Aug. 31 was a major embarrassment and handed Repubs a cudgel with which to beat Biden.

Texas has passed its extreme anti-abortion law and maybe there will a backlash because of its overreach.

The big question is will all these disasters cause the Dems to lose the House and Senate in 2022? It's impossible to tell at this point. A lot can happen in a year and two months. There is still a lot of pro-Trump sentiment out there. During my summer vacations in Maine and Delaware, I saw it. While I was strolling on the main boulevard to Old Orchard Beach, Maine, a huge black pick-up truck with four--count 'em, four--enormous Trump flags flapping from the back, drove by. This vehicle also sported a bumper sticker with a shotgun and words "Your Life Isn't Worth What's in My Truck"--meaning don't touch my ride or I'll shoot you. In Rehoboth, Delaware, the home state of Joe Biden, mind you, there was a homemade billboard in someone's frontyard reading "Thank You, Mr. Trump." I thought, "Thanks for what, giving us COVID?" There was also a Trump flag and a flag with half Stars and Stripes and half Confederate battle emblem flying from a trailer park home. 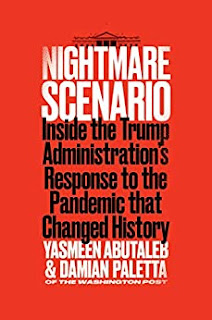 Part of my summer reading was Nightmare Scenario: Inside the Trump Administration's Response to Pandemic That Changed History by two Washington Post reporters and Twilight of Democracy: The Seductive Lure of Authoritarianism by Anne Applebaum. Both books deepened my disgust with Trump and horror at the prospect of his running again and possibly rigging the system to win (There is no way he could honestly win the popular vote.) Trump actually wanted to send COVID patients to Gitmo.

Traditional statistics show that the party not in power always makes gains during the midterms, but I don't believe that will happen just because of precedent. If Biden shows he is improving people's lives and the GOP doesn't convince the fickle middle he's a senile old man, the Dems can hold the Congress. Maybe the Texas law will push more Dems to vote in the midterms to prevent a complete Handmaid's Tale takeover of the Supreme Court. I hope so.

Posted by david.sheward at 3:49 PM