The new post-quarantine Broadway season keeps getting earlier and earlier. Pass Over, Antoinette Chinonye Nwandu's play focusing on two African-American men dealing with pervasive discrimination, will now begin performances at the August Wilson Theater on Aug. 4 with an opening set for Sept. 12. The production will have a limited run until Oct. 10. This beats the previously announced Hadestown's date of Sept. 2 by nearly a month as the earliest starting date for a Broadway show since all 41 Main Stem theaters closed on March 12, 2020. Inspired by Waiting for Godot and Exodus, the 85-minute play is about two young black men, Moses and Kitch, and their encounters with white police oppression. Pass Over will star Tony nominee Jon Michael Hill (Superior Donuts), Namir Smallwood, and Tony winner Gabriel Ebert (Matilda), recreating their roles from an Off-Broadway production at Lincoln Center's LCT3 Theater in 2018. Danya Taymor will repeat her direction. An earlier staging at Chicago's Steppenwolf Theater Company has been filmed by Spike Lee and is available on Amazon Prime. The playwright has made changes since the earlier staging. In the previous version, one of the two main characters dies. Nwandu has stated she will make the new ending more positive.

Finally! The long delayed Tony Awards for the abortive 2019-20 Broadway season will be presented on Sept. 26 in a two-part ceremony. The main event will be a two-hour TV spectacular called The Tony Awards Present: Broadway's Back on CBS from 9-11pm. Only three awards will be presented: Best Musical, Best Play and Best Revival of a Play (there were no musical revival nominees.) The rest of the show will be taken up with musical numbers from classic shows and currently running ones. The bulk of the accolade distribution will be done from 7-9pm in a pre-broadcast ceremony available on the Paramount Plus streaming service. 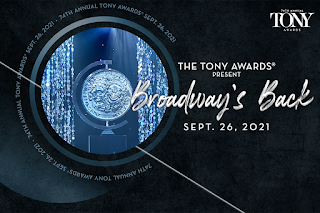 Traditionally presented in June at the end of the Broadway season, the Tonys for 2020 were indefinitely postponed when the COVID pandemic forced the shuttering of all NYC stages. Other theater award presentations such as the Drama Desks, Lortels, Obies, New York Drama Critics Circle, and Outer Critics Circle went ahead in May 2020 at more or less their usual times over Zoom or via press release announcements. The Tonys held off because of their function as a marketing platform for currently running productions. If there were no shows running, what's the point of putting on a big free commercial for Broadway? The nominations were announced last October and then the Tony electorate voted in March. The current format explicitly underlines the Tonys' primary roles as a sale tool for Broadway as opposed to being a ceremony to award excellence. The mass audience will only see 3 awards being given out and the emphasis will be on selling the shows and celebrating the theater's reopening.

This format has been done before. From 1997 to 2002, the show was split in two with "minor" awards being presented on PBS and the acting and top prizes distributed on CBS. (Even when the show went back to all the awards being presented on CBS in 2003, the majority of design and creative awards were handed out before the broadcast with short filmed excerpts played on the air.) Hopefully, this new split template with only three of the prizes given in the CBS portion will not be repeated. With ratings for the Tonys plunging drastically in recent years, a Paramount + streaming segment seems likely in the future. It's understandable that the Tonys would be different this year with a 15-month hiatus. CBS has a contract to air the Tonys until 2026. Let's hope they keep it and bring the award presentations back to the network part of the show.

Here is a rundown of the 2021-22 Broadway/Off-Broadway Season with opening dates listed: