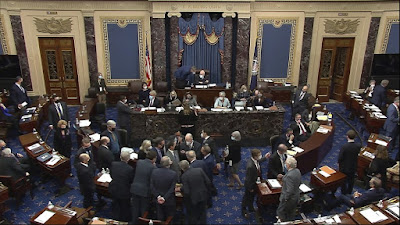 The night before he was inaugurated, President-Elect Joseph Biden and Vice President-Elect Kamala Harris held a beautiful, touching memorial service for those lost to COVID. That's something Trump never did because he didn't want to recognize the national trauma the pandemic caused. If he did, he would have to admit it was a trauma which occurred on his watch and that his inaction contributed to it. Similarly, the events on Jan. 6, 2021 were a national trauma provoked by Trump's failure as a president and national healer. The insurrection was an assault on all of America by a crazed, bloodthirsty mob. I remember feeling as if I had been attacked and brutalized, even though I wasn't there. (I remember thinking, "I am living in a third-world country or a nation about to be taken over by the Nazis?") My congresswoman Alexandria Ocasio-Cortez spoke of surviving a sexual assault and how the events of that day triggered her feelings of danger and violation. That's what Trump's mob did to us and the impeachment trial in the Senate, even though it resulted in a second acquittal of the Orange Menace, was important so we can acknowledge that trauma and deal with it. Just like Biden's COVID memorial was a step towards healing, the House Managers' presentation were a vital move towards coming together.Republicans, with a few exceptions, squawked "We need to get past this. Bury it under the rug. Don't talk about this. You're glorifying violence like Quentin Tarantino. Just forget it. This will only divide us even further." But viewing the videos of the murderous MAGA mob and how close they came to injuring or even killing the Vice President, the Speaker of the House and all those present, helps us process the pain. It was a form of necessary therapy and the country, those of us who chose to watch, were like patients. From Jan. 6 until now I have recoiled at the insurrection footage which has gotten bloodier and more disturbing. But I felt better after the prosecution presented its case. They were saying, "This happened. It was not Antifa, it was real and disturbing and hurtful. Donald Trump caused it. He had been laying the groundwork for months with his incessant, unfounded claims of voter fraud. When the crowd turned violent, he didn't care and egged them on with more tweets denouncing VP Pence." It validated my feelings and put Trump's abhorrent depravity in the public record. (BTW, I couldn't believe when that short-tempered Philly-delphia--his pronunciation--personal injury attorney said "I'm sure the president was concerned about the Vice-President's safety. They got along so well." So why didn't he call him for five days???)

I was not surprised by the final vote. I'm glad at least seven Republicans voted guilty. That's the largest bipartisan guilty impeachment vote. (In 1868, Andrew Johnson got 35 guilty votes, all Republican, and 19 non-guilty votes, nine Democratic and 10 Republican. So Republicans crossed party lines to vote innocent, but no Dems voted guilty. Similarly, some Repubs. voted Bill Clinton not guilty, but no Dems crossed party lines for guilty for Bill. On the first Trump impeachment, only Mittens Romney sided with the Dems.) There is a lot of whining and hand-wringing on the Internet that the Dems caved on not calling witnesses and that this move costed them the 2022 midterms and the 2024 Presidential election. Poppycock, I say. The results would have been the same and Castor (my high school classmate), van der Veen, et al would have called in every Tom, Dick and Harry and dragged it out for weeks. I seriously doubt if progressive Dems will still be pissed about no witnesses and stay home in 2022 and 2024. 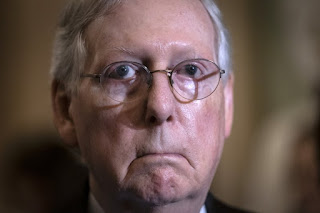 Mitch McConnell immediately went on the floor after the final vote and pled the case for locking up Trump--after voting to acquit him. I will skip over the pretzel-like contortions Granny McConnell went through to justify his vote and skip to the important part about what happens to the GOP now? There is a full-on civil war erupting among them over whether to dump the damaged Trump or embrace him because a majority of the zombie-like rank and file still love him. Lindsay Graham went on Fox News the next day and dismissed McConnell's condemnation as something the minority leader needed to "get off his chest." For an added extra bonus, Lindsay touted
Trump's daughter-in-law Lara (not Laura, Lindsay) as the next GOP Senate candidate from North Carolina and as the future of the party. Lara and her husband Eric better hurry up and move to North Carolina then.

So which way will the Repubs go? Will they follow Graham, Paul, Cruz, Hawley and tie their fate to Trump or will they listen to McConnell, Romney, Liz Cheney and Nikki Haley and cut the cord? Going full-tilt Trump crazy might win them some bright-red districts, but they will lose suburbs and never retake the White House. There have been rumblings about the sane wing forming a third party, but that seems unlikely. As Trump comes out of his hole, a reckoning will have to take place and all Repubs will have to chose: Trump or sanity.

Meanwhile, the rest of the country had a much needed catharsis with addressing the damage done by Trump's terrorists. Maybe now we can get on with the business of recovering from COVID and letting Biden take center stage.