The NYC community of theater critics continues to shrink. We're like some rare endangered species in a seldom-visited jungle and nobody seems to care as our numbers diminish. (We don't even get a late-night commercial with sad music pleading for funds to save us.) It was barely noticed that Elysa Gardner left USA Today where she was the theater and rock critic since 2000. There has been no announcement as to whether she was let go or departed voluntarily. She briefly tweeted the information that she was no longer with the nationwide publication on Aug. 1. Worse, there was no mention of it in any of the chat boards or on any of the theater-related websites (Not that I could find anyway.) USA Today has apparently dropped theater coverage altogether. They did not assign anyone to review the first two Broadway openings of the fall--The Encounter and Holiday Inn.

On June 30, I blogged that Elisabeth Vincentelli of the New York Post and Jeremy Gerard of Deadline had been dismissed from their publications. Vincentelli, like Gardner, is now working freelance. The former New York Post critic has had assignments from the New York Times, the New Yorker, and the Wall Street Journal. Gerard is still writing for Deadline, the insider show-biz website, but on a freelance basis and has resumed covering the theater scene from both a critical and journalistic angle without missing a beat. So that is some consolation.

Those major publications with a print component are devoting less and less room to serious critical theater writing. The Post assigned staff entertainment writer Johnny Oleksinski to review The Encounter, Simon McBurney's solo play featuring sensational immersive sound design. Oleksinski adapted the Post snarky house style and nastily dismissed the show as an elitist snoozefest, labelling the show "the perfect night out for the nose-up, pinky-out set" and "This American Life-less Bore." (I always put my pinky out when attending the theater, don't you?) That's okay, at this stage, we should be grateful the Post is covering Broadway at all. They failed to send a critic to Holiday Inn, perhaps because its target audience is too old for their desired demographic but they will probably dispatch Oleksinski to Oh Hello since it stars two click-bait Comedy Central comedians. (I saw the show last night and the audience was the youngest I've seen at the theater in years.) The Daily News is still fulfilling the mission to evaluate Broadway shows, but just barely. Joe Dziemianowicz's review of Holiday Inn was only 135 words. 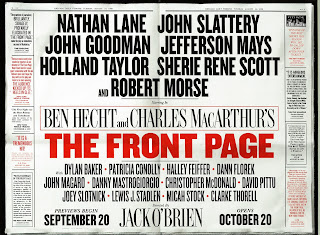 In related news, there has been a mini-brouhaha among the scribbler set over press dates. Scott Rudin, the producer of the all-star revival of The Front Page decided to harken back to the days of the play's settings, the 1920s when reviewers all attended opening night and ran up the aisle as the curtain fell to get to their offices for the morning edition. Nowadays, first-night critics are invited on a range of dates during the last few previews. For a publicity stunt, the major press were invited only on opening night. They were also given a ticket to the opening night party. The Hollywood Reporter's David Rooney was the sole regrets-only respondee, stating he has previous plans that night and could not attend. How about an earlier preview performance? Rudin shot back nothing doing. As of now, all are waiting to see who will blink first.

Updating Broadway, Lucas Hnath's A Doll's House 2 will open at the Golden just before the Tony nomination cut-off. Starring Laurie Metcalf, Chris Cooper, Jayne Houdyshell, and Condola Rashad, this is a sequel to Ibsen's revolutionary work. A Doll's Life, a 1982 musical, followed a similar track, but was a quick flop. Hanth's plays Death Tax which I saw at the Humana Festival at the Actors Theater of Louisville, and The Christians and Red Speedo, both Off-Broadway last season, displayed innovation and imagination. So it should be interesting.

Here's an updated breakdown of the Broadway and Off-Broadway season:

Special Attractions
Alton Brown Live: Eat Your Science
Black to the Future
Frankie Valli and the Four Seasons on Broadway!
The Illusionists: Turn of the Century
Kristin Chenoweth: My Love Letter to Broadway
Oh Hello on Broadway
Posted by david.sheward at 8:54 AM